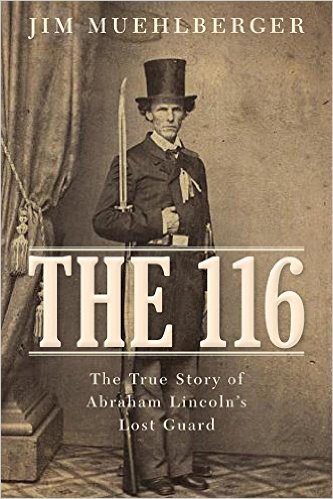 James H. Lane is best known to Civil War students as a fiery pro-Union “Jayhawker” abolitionist in Kansas, a man whose constant battles with secessionists and pro-slavery advocates led to the term “Bloody Kansas.” He had been an officer in the Mexican War and then as a congressman from Indiana, he had ardently supported the Kansas-Nebraska Act. During the war, he was a senator from Kansas and a Union general.

What is not often known about Lane is the fact that he was the leader of a group of 116 men, mostly from the western frontier, who organized into a group in Washington, D.C., at the start of the Civil War to help protect President Abraham Lincoln and the capital city.

Author James P. Muehlberger has painstakingly combed the records, using diaries, personal accounts, newspaper articles, memoirs, government documents, and other primary sources to retell the story of Jim Lane and his trusted band of volunteers in his new book, The 116: The True Story of Abraham Lincoln’s Lost Guard.

Shortly after the Rebels fired on Fort Sumter on April 12, 1861, Jim Lane traveled to Washington via train, arriving on the 13th. He collected a few of his old friends from Kansas who were now living or working in the region and on the 17th called them to at a meeting in Washington’s famous Willard Hotel. Lane then met with President Lincoln, who had visited Kansas before the war and met with Lane. He informed Lincoln that he and his men were at the government’s service at the command of the president. If a crisis erupted, the Frontier Guard would be there at a moment’s notice.

Lincoln assigned Captain Lane and his followers to guard the Executive Mansion (as the White House was then known). Lane formally organized them on the 18th into the Frontier Guard. While the majority were from Kansas, the rest were from a wide scattering of Northern states, including 27-year-old P. L. Harman from Lancaster, Pennsylvania. Other Keystone volunteers included men from Philadelphia, Scranton, Wilkes-Barre, Pottsville, and Allegheny City. On the other extreme, the company included a pair of Californians.

Some in the media called them “desperados” who were “commanded by the notorious Jim Lane and comprised of his desperate Kansas followers.” Exaggerated reports claimed Lane led a band of more than 1,000 “exiled fugitives,” not the 116 who had formally signed their names to the enrollment sheet.

Lane sent out various patrols to guard the railroads and important government buildings and facilities, including the Navy Yard, while awaiting the arrival of newly raised Union troops. On April 27, Lane sent a note to Simon Cameron, the Pennsylvania-born Secretary of War (he was from Maytown in Lancaster County), offering to disband the Frontier Guard because of the fresh troops who had arrived in large numbers. Cameron concurred and wrote a formal letter of thanks for their service.

Muehlberger’s book is fast-moving, well-written and fresh, a solid book on a topic long forgotten. He has brought the precarious initial days of Washington in the Civil War to life, days in which no one was certain that hordes of secessionists would not rise up and seize the capital city. Jim Lane and his 116 Frontier Guards deserve recognition for their service in those trying times, and it is surprising that no one prior to Muehlberger had written extensively about this company. Muehlberger’s book is a must-read for anyone wanting a better understanding of the nation’s capital and newly inaugurated President Abraham Lincoln’s first critical few weeks after the firing on Fort Sumter.