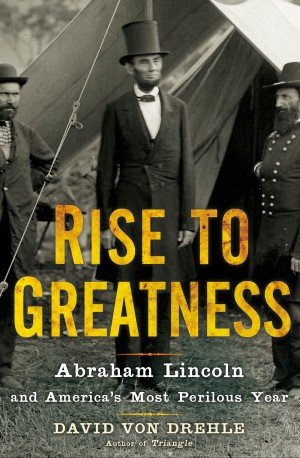 Abraham Lincoln took office in 1861 during troubling times. The South had seceded, fired on Fort Sumter, reacted angrily to his raising of troops to put down the rebellion, and prepared for war. Four more states left the Union, blood was spilled at Bull Run and other places, and 3-month enlistments gave way to 3-year troops.

And that was just the beginning, for 1862 would bring even more distress and bloodshed. From the Shenandoah Valley to the Virginia Peninsula, names such as Stonewall Jackson and Robert E. Lee gained prominence. In the west, U.S. Grant won at Shiloh, and William T. Sherman showed a bulldog tenacity. Through it all, President Lincoln took the opportunity to reshape Northern policy and war aims from simply preserving the Union to one aimed at halting slavery in Confederate-occupied sections of the South. He also had to balance right-wing abolitionists vs. a growing peace movement which threatened broad support for the war effort, while at the same time keeping an eye on foreign relations.

It was, perhaps, the most difficult year of his presidency, one which stamped Lincoln’s imprint on Union policies, and reshaped America for generations to come. Author David Von Drehle, the writer of the popular book Triangle about the infamous 20th century Triangle Shirtwaist Factory fire, has neatly captured the economic, political, social, and military settings which Lincoln faced in 1862, events which conjoined to present a unique set of challenges, and an opportunity to free millions of enslaved black men, women, and children. Von Drehle’s new book is entitled Rise to Greatness: Abraham Lincoln and America’s Most Perilous Year. It is a worthy addition to Lincoln historiography.

“In Lincoln’s view, the end of slavery was not a matter of ‘if’;” so writes Von Drehle, “it was a question of when, and how. Long before he became a national figure. he had predicted that the time would come when all Americans would be forced to choose sides over slavery, and he knew which side he would be on.”

Lincoln had to maneuver between the constraints imposed by the Constitution, by a Supreme Court which openly defended slavery, by the need to hold loyal slave states in the Union, and under intense pressure from the abolitionists in the North, coupled with the peace movement and those who wanted to leave the South alone. Within the complicated and volatile political box, faced with the overwhelming events at the Battle of Antietam which stopped the Rebel thrust toward Pennsylvania, Lincoln took action through the Emancipation Proclamation to set men free.

Few politicians were his equal at sizing up the political landscape, understanding  opponents’ strengths and weaknesses, and figuring how to get his agenda pushed through against a dangerous backdrop of war, eroding support on the home front, and using the moral dilemma over slavery to his advantage. In 1862, perhaps we see Lincoln the president at his finest.

Von Drehle’s book is a must have for the Lincoln buff, Civil War fan, political junkie, or for anyone interested in a broader look at how the battlefields of 1862 and their ramifications on the politics of the era and their implications for the future of American, both black and white.

Here’s a blurb from the publisher:

As 1862 dawned, the American republic was at death’s door. The federal government appeared overwhelmed, the U.S. Treasury was broke, and the Union’s top general was gravely ill. The Confederacy—with its booming economy, expert military leadership, and commanding position on the battlefield—had a clear view to victory. To a remarkable extent, the survival of the country depended on the judgment, cunning, and resilience of the unschooled frontier lawyer who had recently been elected president.

Twelve months later, the Civil War had become a cataclysm but the tide had turned. The Union generals who would win the war had at last emerged, and the Confederate Army had suffered the key losses that would lead to its doom. The blueprint of modern America—an expanding colossus of industrial and financial might—had been indelibly inked. And the man who brought the nation through its darkest hour, Abraham Lincoln, had been forged into a singular leader.

In Rise to Greatness, acclaimed author David Von Drehle has created both a deeply human portrait of America’s greatest president and a rich, dramatic narrative about our most fateful year.

Rise to Greatness: Abraham Lincoln and America’s Most Perilous Year