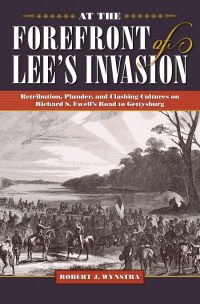 New book studies interactions between Rebels and PA civilians, including in York Co.

The cry of anguish spread like wildfire across south-central Pennsylvania in mid- to late-June 1863 as riders on lathered horses raced into villages and towns to warn the inhabitants that elements of Confederate General Robert E. Lee’s vaunted Army of Northern Virginia were on their way. Many terrified residents scurried into their homes or rushed off to fields and stables to take their horses to a place of presumed safety. Others had already fled days previously upon the first reports that the Rebels had crossed the Potomac River and were marching steadily northward through western Maryland toward the Mason-Dixon Line, apparently intent upon entering Pennsylvania.

It was not a new concern.

Back in September 1862, Lee had marched toward the Keystone State during the Maryland Campaign and some advance parties had visited southern Franklin County in the Cumberland Valley before Lee turned to protect the vital river crossing in what variously became known as the battle of Antietam or Sharpsburg. A month later, J.E.B. Stuart’s cavalry rode into Chambersburg, PA, and burned railroad facilities there before crossing South Mountain, coming within a few miles of Gettysburg, before turning southward and returning to Virginia. Since then, false alarms had occasionally been sounded as rumors abounded of additional Rebel incursions.

Veteran author Robert J. Wynstra of Illinois has neatly captured the interactions between the oncoming, dreaded Southern soldiers and the Pennsylvania populace in his fascinating new book, At the Forefront of Lee’s Invasion: Retribution, Plunder, and Clashing Cultures on Richard S. Ewell’s Road to Pennsylvania (Kent State University Press, released October 16, 2018). Once in Pennsylvania, Ewell sent two of his three divisions, plus the bulk of his cavalry and artillery, northeasterly from Chambersburg through Carlisle toward Harrisburg while sending the remainder, under the crusty but capable Maj. Gen. Jubal A. Early, as an independent force eastward through Gettysburg and York toward the Susquehanna River’s mightiest bridge at Wrightsville. Foraging parties scoured the countryside, searching  farms and villages for fresh horses, supplies, food, and items of military value (as well as also taking non-essential or personal items at times).

In this region of plenty, the summer crops were ripening, a fact not lost on the Rebels. In places, soldiers actually threshed wheat and cut down grain for their needs. Grist mills, filled with corn and summer wheat, were quickly emptied. Springhouses and larders likewise fell victim to Southern haversacks and wagons. Fresh rye whiskey was a prized find for many Confederates looking to quench their throats after a long day on the road. Anxious residents responded with a wide array of emotions, from fear to scorn to, in some cases closest to Maryland, with welcome freewill offerings of food and milk. In York, some flew small Confederate flags as Early’s men marched through town.

There have been a handful of recent books that have previously detailed these interactions, most notably Cooper Wingert’s The Confederate Approach on Harrisburg (which focused solely on Ewell’s main column) and Scott Mingus’s Flames Beyond Gettysburg (which covered Early’s expedition to the Susquehanna River). Rob Wynstra’s new book bridges these two independent works, and it adds much more detail on the civilian-soldier interplay than does Col. Wilbur S. Nye’s classic book, Here Come the Rebels, which is now more than 50 years old. Wynstra has long been an expert on the movements and battles of Ewell’s men, having written previously on the topic, including his multiple award-winning biography of one of Ewell’s most enigmatic subordinates, Brig. Gen. Alfred Iverson. In his latest work, he has made extensive use of soldiers’ diaries and letters home, as well as post-war border claims and civilian accounts, to weave together a compelling narrative that carries the reader back across the intervening years with an almost “you are there” feeling.

Wild rumors had spread that the Rebels had horns, that they ate children, that they intended to burn buildings and massacre the populace. When the feared soldiers arrived, many residents were surprised that “they are just like us,” as one person remarked in astonishment. In other cases, despite General Lee’s strict orders not to harm personal property, Confederates vandalized homes and at one farm in Franklin County, murdered an innocent man. Wynstra wonderfully captures these incidents, as well as a myriad of other interactions from that long ago summer campaign. As the author aptly puts it in his subtitle, it was a clash of cultures on the road to Gettysburg.

This book is destined to be nominated (and likely win) as many awards or more than his fine book on Iverson, which captured several important book awards for Gettysburg history. It is an extremely worthy addition to the vast array of Gettysburg literature.