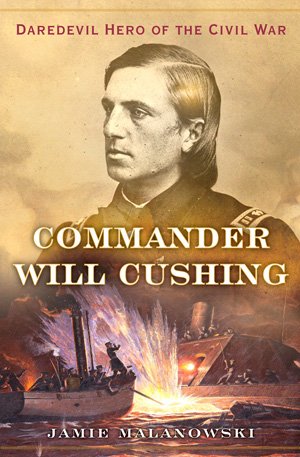 Much media attention had focused this year on the Medal of Honor being awarded to an artillery officer, Alonzo Cushing, who heroically died defending his guns at the 1863 battle of Gettysburg during what became known as Pickett’s Charge. The president presented the medal to one of Cushing’s distant relative.

While Alonzo has garnered the news headlines in recent years, he was one of four brothers who served in the Union army during the Civil War. Milton was a paymaster in the U.S. Navy and Howard, like his younger brother Alonzo, served in the light artillery. Perhaps the most dashing and charismatic was William Barker Cushing, a year younger than Alonzo.

Long-time author Jamie Malanowski has written for the New York Times, the New Yorker, and Vanity Fair. His popular book And the War Came deals with the six month period between Abraham Lincoln’s election and Fort Sumter. In his latest work, Commander Will Cushing: Daredevil Hero of the Civil War, Malanowski neatly and effectively reintroduces this sibling to the modern reader. 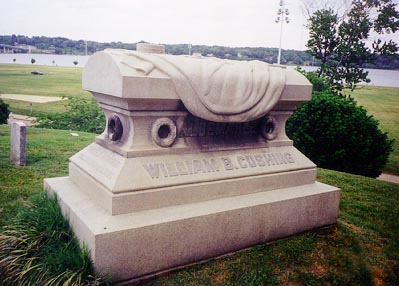 Commander Wm. B. Cushing’s tomb at the U.S. Naval Academy in Annapolis, Md. (Courtesy of Wikipedia)

Born in Wisconsin and raised on New York, Cushing was a live wire and prankster, so much that his antics and buffoonery at the Naval Academy (coupled with poor grades and a lack of discipline) finally led to his expulsion just before graduation. However at the outbreak of war, with the need for daring young officers rising, he successfully petitioned Secretary of the Navy Gideon Welles for reinstatement to the service.

Appointed as a lieutenant in 1862, Cushing quickly developed a reputation for dash and daring, and he performed well in action at the battle of Hampton Roads and again at Fort Fisher. He is best remembered, however, for his sinking of the CSS Albemarle in October 1864, the result of a daring plan brilliantly executed. It brought Cushing to national attention and resulted in him receiving the Thanks of Congress.

Jamie Malanowski presents his vivid prose in a series of 55 short, but effective chapters. As a result of this structure, the book is fast-flowing and easy to read. He brings Commander Cushing to life, covering all of the important events in his life in satisfying detail while nicely capturing the essence of the man, his exploits, and his career. He also explores Will’s relationship with his beloved brother Alonzo and his reaction to the news of his death in southern Pennsylvania.

This book is a welcome addition to the historiography of the Union Navy in the Civil War, especially in a sesquicentennial year when many of the important naval actions seem to have been overshadowed by infantry reenactments. Even the 150th anniversary of Will Cushing’s raid on the Albemarle took a backseat to the government’s announcement that month of the belated awarding of the Medal of Honor to Alonzo.

Malanowski’s work rectifies a void in recent literature and is a must read for anyone interested in U.S. naval personalities from the Civil War era. It also, quite frankly, is an engaging and stand alone read for anyone who enjoys an adventure tale well told.

Commander Will Cushing: Daredevil Hero of the Civil War