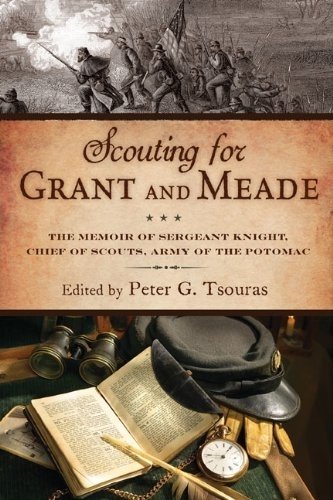 Judson Knight for part of the American Civil War served as the Chief of Scouts for the Army of the Potomac. He performed well in that role and received the commendations of Generals U. S. Grant and George G. Meade. At a time when military intelligence was still in its infancy and often relied upon rather crude (and often inaccurate or exaggerated) reports, Knight helped modernize the Union army’s scouting methods and gained the trust of his superiors.

The New York native enrolled in 1861 in the 2nd New Jersey Infantry and later became a scout for Phil Kearny. He later served in the Bureau of Military Intelligence under Col. George Sharpe. Thirty years after the war, he began submitting articles based upon his wartime exploits to the National Tribune, a repository of soldiers’ personal experiences. These have languished in relative obscurity until now, when researcher and writer Peter G. Tsouras painstakingly collected these articles, annotated them, and reissued them along with biographical and background information in a new book entitled Scouting for Grant and Meade: The Reminiscences of Judson Knight; Chief of Scouts, Army of the Potomac.

Published in 2014 by Skyhorse, this new book offers a rare glimpse into the missions of the BMI scouts, many of which like Knight were civilians and former soldiers. Divided into ten chapters, Tsouras’s new book follows Knight’s career in chronological order beginning with his days serving under General Kearny. Many of Knight’s accounts are detailed and interesting, including his brushes with death as he dodged Confederate rangers under legendary leaders such as John Singleton Mosby (the “Gray Ghost”) and Marylander Harry Gilmor.

Other chapters follow Knight’s exploits between Gettysburg and the Wilderness, a time when he refined and honed his skills and passed considerable useful intelligence to the army. He deftly recounts his participation in the 1864 Kilpatrick-Dahlgren Raid, an ill-fated raid on Richmond which led to the death of the colorful Union cavalry officer Ulric Dahlgren. Knight discusses in fascinating detail a particular  scouting foray in Northern Virginia operating in conjunction with Phil Sheridan’s chief of scouts, William J. Lee. Knight later recounts his missions from the Wilderness to Cold Harbor. He served as a scout through the end of the war.

The book includes several period photographs of key personalities and locations mentioned in Knight’s accounts. Tsouras and his editors have also included several sidebars with more details on leaders and events, including selected excerpts from the Official Records and other primary and secondary sources. Additional maps would have been useful in helping the reader orient the locations of Knight’s various missions. There are some maps, indeed, in the book, but perhaps not as many as could have been used.

An appendix contains the names of every known member of the Bureau of Military Intelligence, from its leadership to the scouts and down to the auxiliaries such as cooks and the mail department.

This new hardback book is a valuable addition to the historiography of the Army of Northern Virginia, presenting in fine fashion not only Judson Knight’s post-war reminiscences but also corroborating accounts in which Knight’s name is mentioned. In addition, Peter Tsouras’s detailed footnotes offer additional clarity and exposition to the first person eyewitness narratives. It is an interesting and worthwhile read for anyone interested in the intelligence and scouting side of the operations in the Northern Virginia portion of the Eastern Theater of the Civil War.

Scouting was a dangerous and at times fatal occupation. Knight’s prose vividly recounts his wartime experiences. We can thank Peter Tsouras for presenting these accounts to a modern generation in book format. Well done!

Scouting for Grant and Meade: The Reminiscences of Judson Knight, Chief of Scouts; Army of the Potomac

Edited by Peter G. Tsouras; introduction by William B. Feis.