New book on the failed 1861 Peace Conference in Washington DC 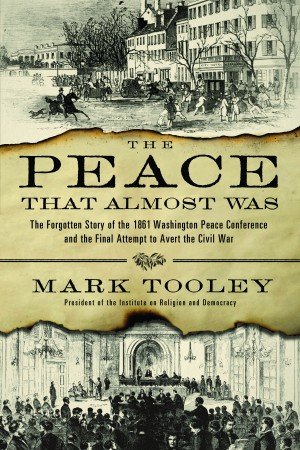 Following the presidential election of 1860 which saw Abraham Lincoln win both the popular vote and the electoral college, several Deep South states, concerned over the Republican Party’s platform against the westward expansion of slavery, seceded from the Union and formed the Confederate States of America. By the winter of 1860-1861, the division had deepened and some hot-heads on both sides were agitating for war.

Many Northern and Southern states sent delegates to a specially convened, bi-partisan Peace Conference to be held in the sprawling Willard’s Hotel in downtown Washington, D.C.  The meeting, a last-ditch effort to avoid war, was to commence in mid-February. Most of the delegates were prominent former politicians, judges, and civic leaders; they largely the elder statesmen from their respective states. A few still held office, but in general, most were in the twilight of their careers and lives. Some observers mocked the gathering; fiery New York newspaper editor Horace Greeley deemed the delegates as “political fossils” who had only become relevant again because of the national shock over the secessionist movement.

While dominating the newspaper headlines throughout February 1861, the Peace Conference ultimately failed to reconcile the opposing views of the North and South. Just two months later, South Carolina Confederates launched a lengthy artillery bombardment of Union-held Fort Sumter in Charleston Harbor, finally igniting the War Between the States / Civil War after years of political agitation and occasional bloodshed in Kansas and Virginia. It was a goal several of the more radical firebrands on both sides had sought, despite the efforts of those moderates who favored reconciliation, or at least a peaceful separation.

In the intervening 154 years since the failed Washington Peace Conference, little has been written about it. In many general histories of the Civil War, it warrants only a few paragraphs; in some cases, it is either ignored totally or relegated to a single sentence or two.

Washington-based author Mark Tooley has written a new full-length book on the convention. Aptly entitled The Peace That Almost Was: The Forgotten Story of the 1861 Washington Peace Conference and the Final Attempt to Avert the Civil War, this new work is a fascinating, in-depth look at the inner workings of the conference; the delegates who toiled, argued, and ultimately failed to find a solution; the preachers and pastors who prayed for peace each day to open the proceedings; and the rather ineffectual efforts of President Buchanan to take a firm stand before handing off the reigns of the country in March to Abraham Lincoln.

Some states such as California and Oregon were too far away to send delegates on short notice; others chose not to do so because of preconceived notions that their efforts would be useless. However, for the states which did send delegations, their representatives were a cross-section of politicians who had often in the past argued the very same positions in congress or at the state level. Ultimately, they were not in a position to bring peace.

Tooley’s narrative casts a modern light on the Peace Convention and is well worth a read. There are a few minor nits, however. At times, the author needlessly reintroduces characters repeatedly, such as telling us many times in the first few chapters that James Buchanan was a bachelor and his niece Harriet Lane acted as a surrogate First Lady. Once or twice would have sufficed. He also spends too much time detailing the history of the local churches, which in some ways detracts from the story line but does show how religion played a role in the lives of many of the key participants and helped influence and shape their respective values. Tooley also jumps around a bit in the early chapters, going back and forth in time before settling down and going through the conference proceedings in a more chronological fashion. While the review copy of the book lacked maps and photographs, the commercial print version does have considerable of both.

Those annoyances aside, this is a compelling book which is easy to read and comprehend, and full of useful material for the neophyte such as myself who is totally unfamiliar with the Peace Conference. People well versed in this event might be disappointed with the flow of the book and the lack of detailed examination into the issues of the day (and historical interpretation), but I personally found this book to be quite interesting and educational, and I now know much more about John Tyler’s efforts than I did previously. And, ultimately, Mark Tooley’s book has succeeded in what every historical narrative should seek to do — educate, inform, and convey the facts of long-ago events to a modern readership in a way that is easy to understand and comprehend. For that, I sincerely thank him.