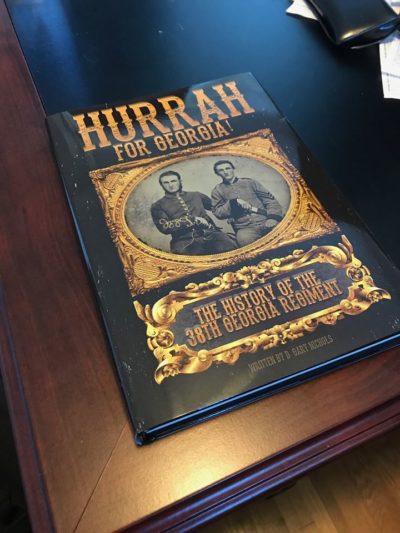 D. Gary Nichols has recently published a new book-length account of the 38th Georgia Volunteer Infantry during the War Between the States / Civil War. The limited edition, dust-jacketed hardback sold out in pre-sale subscriptions. I have communicated with the author a few times as this book was in pre-production and had reserved a copy. It arrived this week, and I am impressed by Nichols excellent research and clear prose. The book, what I have read so far, is a fascinating account of one of the six regiments that Confederate Brigadier General John Brown Gordon led into York County, Pennsylvania, on Saturday, June 27, 1863, camping near Farmers’ Post Office along what is today’s U.S. Route 30. There, the chief burgess of York and several civic leaders negotiated the peaceful surrender of York and the terms by which the Confederates would occupy the town (the negotiations, frankly, were one-sided; dictated by the Rebel generals).

On Sunday, June 28, 1863, the 38th Georgia and the rest of Gordon’s brigade paraded through downtown York beginning at 10 a.m. They marched through town and headed east to Wrightsville, pausing roughly where today’s East York Wal-Mart is located for a lunch break and rest stop before going on to Hellam Township.

Nichols’ new work is chock full of anecdotes and personal stories that he has assembled over the years. A few of those accounts concern the Georgians’ brief four-day visit to York County. Here’s an example:

We entered the state of Pennsylvania on the 23rd and occupied Chambersburg on the same day,” Lieutenant George H. Lester later penned. “Here we struck the famous Pennsylvania militia mounted on their fat horses; but at the first fire of a cannon they wheeled and fled, followed by the derisive shouts and jeers of Ewell’s ragged infantry. Here our regiment was detailed and sent to York, a considerable town. At this place General Early made a levy on the population for hats to cover his bare-headed men.

“Here the following incident occurred: A Negro named Ned, a servant of one of the boys, (while our men were engaged in cutting down U. S. flags, many of which were displayed from poles.) concluded to forage a little on the enemy and entered a Dutchman’s confectionery and proceeded very deliberately to empty a barrel of crackers upon his blanket and to carry them out in the street to [the] boys, to the great consternation of Dutchy and amusement to the boys. From here we followed the militia to Wrightsville, on the Susquehanna River.

“Here we captured all everything to gladden the heart of a soldier, among other things a train load of whiskey, and I regret to say that another big drunk was the consequence. The militia having crossed the river here and burned the bridge, the pursuit was abandoned. By this time the Federals [the Army of the Potomac] had gotten between us and our main army; so we went around by Hillsboro [Heidlersburg], and joined the main army near Gettysburg…”

A15 Publishing, which produced this new book, is a military veteran-owned private boutique publisher, catering to military books written by fellow veterans.