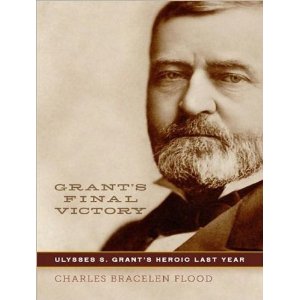 The old war hero was gone. “Ulysses S. Grant, twice President of the United States, the defender of the Union, the victorious leader of our soldiers and General on the retired list of the army, is dead. To the last he was the true soldier, strong in spirit, patient in suffering, brave in death. His warfare is ended,” so wrote the Brooklyn Daily Eagle on July 23, 1885.

Grant, whose reputation was forged at places such as the Wilderness, Spotsylvania, Petersburg, and Appomattox, suffered twin catastrophes in 1884. First, his brokerage firm collapsed in May through the fraud and swindling of two trusted associates, and some in the press wondered if Grant himself was part of the conspiracy to default on $16 million, or at least grossly negligent. Then, in September, doctors diagnosed Grant with terminal cancer. Instead of giving up or becoming morose and depresses, Grant threw his full efforts into writing his memoirs.

His last year would prove to be Grant’s Final Victory, the title of a new book by well respected author and historian Charles Bracelen Flood.  Grant is shown as a sympathetic figure, struggling against pain and the demise of his health and body, in a effort to get his memoirs finished in order to provide income for his wife and family. Grant died three days after completing the monumental work, which became a best-seller after his friend Mark Twain published it.

Flood’s new book is a must read for Civil War buffs, presidential history enthusiasts, or anyone looking for a book on a courageous person who refused to give up, even when faced with two calamities within the span of a few months.

Long ago in my early teenage years, one of my relatives gave me an old 19th-century copy of Grant’s two-volume Personal Memoirs which I have treasured ever since. Now, I have a deeper and keener appreciation for U. S. Grant’s effort to get this set into print. 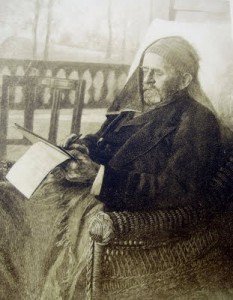 One of the last photographs of Ulysses S. Grant shows him busy with pen and paper as he feverishly works on his memoirs. Photo courtesy of the Library of Congress.

Flood’s new book neatly captures the essence of the old war hero and two-term President, intermixing the struggle of his last days with brief flashbacks into his life and career to help add depth and background to his emotions and actions as he battled bankruptcy and cancer. Free flowing and easy to read, Grant’s Final Victory stands as another masterpiece by Flood, whose earlier works include the highly praised Grant and Sherman and Lee: The Last Years.

Organized chronologically into eighteen chapters, the book is lucidly written, fast-paced, comprehensive, and well researched, and yet reads like a well crafted story. As Grant literally wills his body to live long enough to finish his monumental work, the reader is captivated by the ex-President’s personal struggle and his efforts. Written in a “you  are there” style, Flood’s book is certain to become the definitive work on Grant’s final year of life.

Ensconced in a cottage at Mt. McGregor, N.Y., the general spent as many as 12 – 15 hours a day scribbling his thoughts onto paper, while still managing time for his beloved Julia. His story is one of courage and perseverance, one told ably by the master word-smithing of Charles Bracelen Flood.

The new book is available on the Internet at amazon.com and other websites, and is available at most bookstores, including Barnes & Noble and many independent sellers.