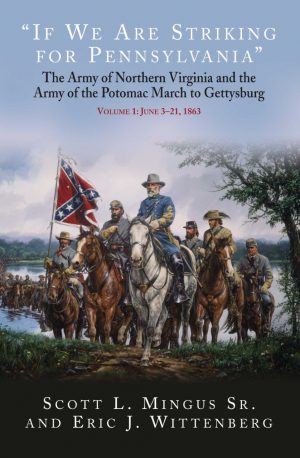 Co-authors Scott Mingus and Eric J. Wittenberg and the team at Savas Beatie LLC announce the publication of volume 1 of what is being called an “essential” study. One early reviewer has stated, “The authors’ exhaustive coverage, deep research, and careful attention to detail, has produced a momentous work that will be indispensable for both historians and students of the war for years to come.”

Volume 1 is now available at Civil War and More in Mechanicsburg, TG Books in York, various bookstores in Gettysburg, publisher Savas Beatie LLC, and various Internet retailers such as Barnes & Noble, Walmart, Target, Books A Million, and Amazon. It is also available directly from the authors at their various book signings and personal appearances.

Scott L. Mingus Sr. and Eric J. Wittenberg, the authors of more than forty Civil War books, have once again teamed up to present a history of the opening moves of the Gettysburg Campaign in the two-volume study “If We Are Striking for Pennsylvania”: The Army of Northern Virginia and the Army of the Potomac March to Gettysburg. This compelling study is one of the first to integrate the military, media, political, social, economic, and civilian perspectives with rank-and-file accounts from the soldiers of both armies as they inexorably march toward their destiny at Gettysburg. This first installment covers June 3–21, 1863, while the second, spanning June 22–30, completes the march and carries the armies to the eve of the fighting.

Gen. Robert E. Lee began moving part of his Army of Northern Virginia from the Old Dominion toward Pennsylvania on June 3, 1863. Lee believed his army needed to win a major victory on Northern soil if the South was to have a chance at winning the war. Transferring the fighting out of war-torn Virginia would allow the state time to heal while he supplied his army from untapped farms and stores in Maryland and the Keystone State. Lee had also convinced Pres. Jefferson Davis that his offensive would interfere with the Union effort to take Vicksburg in Mississippi. The bold movement would trigger extensive cavalry fighting and a major battle at Winchester before culminating in the bloody three-day battle at Gettysburg.

As the Virginia army moved north, the Army of the Potomac responded by protecting the vital roads to Washington, D.C., in case Lee turned to threaten the capital. Opposing presidents Abraham Lincoln and Jefferson Davis, meanwhile, kept a close watch on the latest and often conflicting military intelligence gathered in the field. Throughout northern Virginia, central Maryland, and south-central Pennsylvania, meanwhile, civilians and soldiers alike struggled with the reality of a mobile campaign and the massive logistical needs of the armies. Thousands left written accounts of the passage of the long martial columns.

Mingus and Wittenberg mined hundreds of primary accounts, newspapers, and other sources to produce this powerful and gripping account. As readers will quickly learn, much of it is glossed over in other studies of the campaign, which cannot be fully understood without a firm appreciation of what the armies (and civilians) did on their way to the small crossroads town in Pennsylvania.