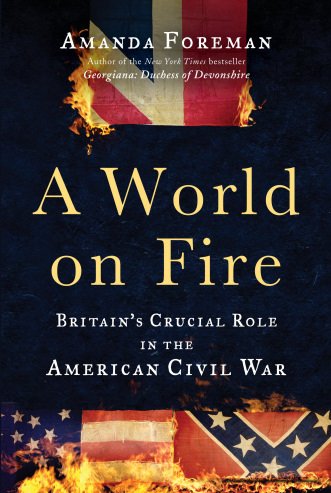 Most Civil War histories make only passing mention of the role that Great Britain and the British people played in the American Civil War, usually referring to the Confederate hope of diplomatic recognition or foreign intervention, the importance of Britain as a trading partner for Southern cotton, and/or a colorful British soldier Sir Arthur Fremantle and his observations of the Battle of Gettysburg.

Author Amanda Foreman has written the most definitive account yet of the relationship between the British and the Confederates, the attitudes of the British press and Parliament, the opinions of the business community and populace, and the political maneuvering both overt and behind the scenes. Her new book, A World on Fire: Britain’s Crucial Role in the American Civil War, delves into nearly every aspect of the British – CSA – USA issue. Impeccably and exhaustively researched, with thorough annotation and bibliography, this new book is a must read for anyone seeking information on the possibility of British intervention on the Rebel side, and shows how the sectional conflict in America was a topic of keen interest in England.

At 955 pages, A World on Fire at first glance can seem quite daunting and overwhelming. However, the quality of writing and the pace of the material are excellent, and Foreman’s style is engaging and educational at the same time. The New York Times rated it as one of its 10 Best Books of 2011, high praise indeed for a book about the Civil War. The book, twelve years in the making, has been nominated for multiple awards, including winning the very prestigious Fletcher Pratt Civil War Prize.

Foreman introduces scores of fascinating characters, both those who support the North as well as those who hope the South can win its independence. The depth and vitality of these characterizations are the spark which drives this book, and help the pages fly by as the reader dives deeper and deeper into the complex, and often uneasy, relationship between the British and Americans, long-time antagonists which had previously fought two wars against one another. The roots of those conflicts for some British leaders played a role, in part, in seeking to divide America. For others, their goal was not political or power-wise, but instead monetary gain from commerce with one (or both) of the warring sides across the Atlantic.

A paperback version of A World on Fire was released in June 2012, joining the earlier best-selling hardback edition. It is available at leading bookstores, as well as on-line and on Kindle and as an audiobook CD.

A World on Fire: Britain’s Crucial Role in the American Civil War