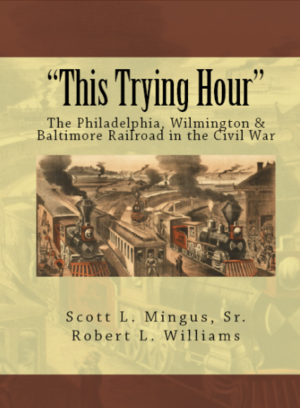 Railroad travelers from Harrisburg or York, Pennsylvania, to Baltimore typically took the Northern Central Railway. From Baltimore, there were convenient connections to Washington, Hagerstown and points west using the Baltimore & Ohio. Once finished with business in Baltimore, the traveler could also take a train northeasterly to Wilmington, Delaware, and on to Philadelphia before returning to York through Lancaster and Columbia. The Philadelphia, Wilmington & Baltimore Railroad formed the backbone of the very popular (and lucrative for the owners) New York-to-Washington route.

When Abraham Lincoln was traveling to Washington for his inauguration, his planned route was on the Northern Central through York to Baltimore. Rumors circulated that the president-elect would be assassinated in Baltimore at the NCRY’s depot, likely via a knife attack (the validity of those rumors remains controversial to this day). The president of the PW&BRR, Samuel Morse Felton, had hired famed detective Allan Pinkerton in early 1861 to learn if rumors that pro-secessionists were going to disrupt or destroy his tracks, depots, and trains. Pinkerton dispersed his agents throughout Baltimore and nearby towns along the PW&B. They reported that not only were there threats against the railroad, but that a group of conspirators led by a Baltimore barber was indeed planned to kill Lincoln.

Felton and Pinkerton soon met with government and railroad officials to discuss options to protect the president-elect. A new book details what happened next, as well as during the next four years as Lincoln made it successfully to Washington, was inaugurated, and led the Union through the Civil War.

Lincoln had been scheduled to give a speech in Harrisburg on February 22 and have dinner with state officials, including Republican Governor Andrew Gregg Curtin. The next day, he and wife Mary Todd Lincoln and their traveling party were to head south on the NCRY through York County down to Baltimore. From there, they would take the short jaunt to Washington on the B&O. Instead, after dinner, Lincoln and his bodyguard, Ward Hill Lamon, took a special, unscheduled train to Philadelphia. From there, Pinkerton and his agents secretly took Lincoln and Lamon to Baltimore on an overnight train and then on to a hotel in Washington. He arrived safely on the morning of the 23rd.

Meanwhile, that same morning, Mrs. Lincoln and the rest of the party boarded the NCRY train as originally scheduled. When the train arrived in York, bystanders were disappointed that Lincoln did not make an appearance. The train steamed through Hanover Junction, Glen Rock, and Railroad (then known as Shrewsbury Station) into Baltimore County. Just shy of the city of Baltimore, the train stopped at a road intersection and Mrs. Lincoln and party got off and entered a waiting carriage to take them to a safe house. Large crowds had gathered at the NCRY’s Calvert Street Station to get a glimpse of Lincoln (or to kill him, as Pinkerton believed). They were disappointed to learn that he was not on board.

Quickly, anti-Lincoln political cartoons appeared in various newspapers around the country. Many mocked him as being afraid; some picked up on rumors that he had traveled in an old woolen army coat while wearing a Scotch “tam” hat. Lincoln later came to believe there had not been a plot against his life and regretted the clandestine trip that had exposed him to ridicule. Pinkerton, Ward Hill Lamon, and Samuel Felton all continued to think that their actions had saved his life.

Long-time York County-based author Scott Mingus and his Maryland-based co-author, Robert L. Williams, cover this story, as well as Lincoln’s other trips on the PW&B, in their newly released book, “This Trying Hour”: The Philadelphia, Wilmington and Baltimore Railroad in the Civil War. The 200+ page book included more than 350 photographs, illustrations, and maps, many of which were custom drawn by Rob Williams. The book retails for $14.99 on amazon.com and is also available from the Civil War and More Bookstore in Mechanicsburg, Pennsylvania.