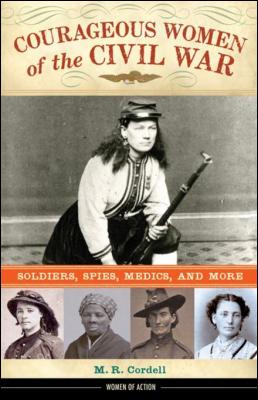 M. R. Cordell is among those modern writers who have recently issued books aimed at the teenage/young adult reader.  She holds a master’s degree in writing from Hamline University in St. Paul, Minnesota and has numerous previous magazine articles to her credit. Cordell’s first book, Courageous Women of the Civil War: Soldiers, Spies, Medics, and More, gives brief biographies and interesting sidebars on sixteen diverse, remarkable ladies — black and white, North and South, famous and not so well known. It is the latest installment in Chicago Review Press’s “Women of Action” series.

Cordell has effectively used primary source documents, as well as period accounts of battles, events, and the sociopolitical climate to craft this well-written, fast-paced collection of individual stories, which she places in their proper historical context. She contrasts the individualism, motivation, initiative, and self-assurance of these carefully selected sixteen women with the stereotypical roles women traditionally played in society at the time. The result is not only a book which is sure to be popular among young history students, but is also satisfying for those older readers who want an easy-to-read, general overview of the subjects covered in Cordell’s fine work.

After a useful 13-page general introduction, the main body of the book is broken into four major sections.

Most of these ladies are rather obscure to the average Civil War reader, and Cordell presents a sweeping overview of each person’s life, major accomplishments, and specific actions in the Civil War. Each mini-biography is short — between 8 to 10 pages generally, with a short list of suggested further reading at the end of the text.

Each biography typically contains at least one sidebar, adding more context to the subject matter, as well as a few direct quotes from the pen of the woman being featured. While certainly not in depth, these biographies are concise and serve to give a good, general overview of the person’s life and main deeds, as well as a giving a glimpse into their personalities and motivations.

Part III: Nurses gives us Georgeanna Woolsey: “Changed by This Contact with Terror”; Susie King Taylor: A Young Nurse in the “First South”; Harriet Ann Jacobs: “She Did Her Own Thinking”; and Cornelia Hancock: Battlefield Angel.

Cordell notably does not cover Clara Barton or some of the other better known nurses and facilitators, but her selection of these four ladies enables her to examine various aspects of the new nursing avocation, one in which women began taking over what had largely been a male function in many previous wars throughout history.

Part IV: Vivandieres is the shortest section, with only three ladies: Marie Trepe: “French Mary”; Kady Brownell: Heroine of New Bern; and Annie Lorinda Etheridge: “This is My Place.” Women such as these trio accompanied their husbands, sweethearts, brothers, or friends on campaign and in camp, sometimes serving as launderesses, cooks, encouragers, or other useful functions.

Cordell rounds out the book with acknowledgments, a short overview of the organization of infantry in the Civil War, a glossary of key terms, some notes, and a general bibliography.

This is sure to be a popular seller among teens who are looking to learn more about the role women played in the Civil War and, hopefully, will cause several readers to seek a deeper understanding through perusing some of the more comprehensive works that Cordell suggests as further reading. The author is to be complimented for a job well done in this fine new book, which she dedicated to her late father, a combat engineer in Vietnam.