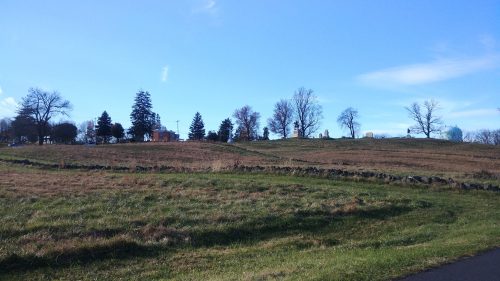 Musings on a rainy morning

As I write this, I am sitting in a hotel room in southern Ohio. The birds are singing, and the day offers promise.

Generally, I love mornings, as they offer a chance for reflection and meditation, and a chance to jumpstart my batteries for a long full day ahead. The moment is peaceful and relaxing, and the day offers interesting challenges and opportunities. For many soldiers at Gettysburg, the mornings brought some sanity to the madness. I have been heavily researching the attack on East Cemetery Hill for a manuscript on the Louisiana Tigers that I just finished and submitted to a leading publisher. Most of the soldiers’ descriptions of the morning of July 2, 1863, are consistent in describing the sense of peace and serenity that morning, despite the carnage of July 1 and the promise that this day would bring even more suffering and pain. But, for now, the morning broke with a calmness that offered hope.

Jacob Smith of the 107th Ohio Volunteer Infantry was enjoying daybreak, “This morning was fresh, balmy and pleasant. The sun shone mildly though an atmosphere still smoky from yesterday’s conflict giving it the appearance of a huge ball of fire. All the world was quiet and at rest. There was nothing outside of our immediate surroundings that would indicate… the dreadful struggle that was not long in starting.”
The peaceful respite from life’s worries was short-lived but highly enjoyable for the soldiers and “embedded” newspaper correspondents.

A Pennsylvania newspaperman was also enjoying the peacefulness of the early morning. “I strolled out to the cemetery were the dew was yet melted from the grass, and leaned against a monument to listen to the singing of birds. One note, milder than the rest, had just broken from the throat of an oriole in the foliage above me when the sullen rattle of musketry on the left told that skirmishing had begun.”

It’s a lesson I have been teaching myself – enjoy the calm and peace, and don’t worry about the day’s problems. Focus on the moment, while planning for (but not fretting about) the future. For Civil War soldiers, it was a matter of survival and mental stability. So, take time for yourself today to do something you enjoy, even if only for a few moments. Soak in peacefulness and relaxation, and forget for a while all the daily problems. It’s a life lesson we can all learn from the Civil War.

Excerpted by a new manuscript I am working on – Spiritual Warfare: Life Lessons from the Civil War.