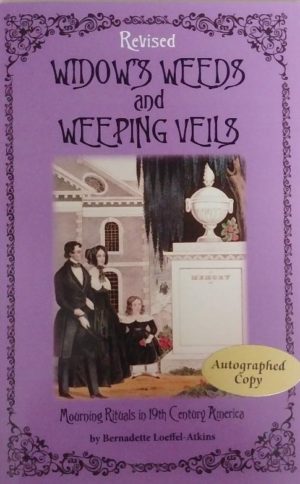 More than 500 soldiers from York County, Pennsylvania, died in the Civil War, according to researcher Dennis W. Brandt, whose detailed database of local soldiers is available on line at the website of the York County History Center. The first battle casualties occurred in the 130th Regiment, Pennsylvania Volunteers at the battle of Antietam on September 17, 1862. Not all the fatalities from York County fell in battle; many died of disease and a few from accidents.

They left behind grieving family members to mourn their passing.

So, what were some of the common mourning customs of the day?

This image from Bern’s book (used by written permission of Gettysburg Publishing) shows some of the typical mourning wear for women. Newspapers and other periodicals at times ran advertisements such as these examples for the latest fashions for mourners. Unfortunately, in an era of warfare and public epidemics, sales were brisk.

The term “widow’s weeds” became associated with the all-black attire that women often donned (weeds was an old English term for clothing). These dresses were usually made of crepe, wool, cotton, or black bombazine (a silk/wool blend) cloth. Veils were often worn, as were brooches or other jewelry containing locks of the deceased hair, if available.

The deceased loved one would often be put on display in a parlor or living room. Blinds were drawn and shutters closed. Mirrors were covered with black cloth. Often, the clocks in the house would be stopped until after the funeral to help ensure quietude during the vigil. Flower arrangements were few, usually only a modest vase of flowers placed next to the coffin.

The corpse in the coffin was always taken out of the house feet first (the superstition was that if the head faces backward, the mourners would follow in death). After the funeral, the mourners would gather back at the home of the deceased for a light meal.

Author Bernadette Loeffel-Atkins, a new York native, was formerly the manager of the Eastern National bookstore at the old Gettysburg Vistors Center before she became involved with the Gettysburg Battlefield and Beyond bookstore on Cemetery Hill. Her book is easy to read, divided into short sections, and an interesting collection of funeral and mourning practices. She discusses wakes and funerals, the cemetery, embalming and undertaking, post-mortem photography, spiritualism and the afterlife, and mourning art and jewelry. Other sections include information on mourning clothing, children in mourning, songs, recipes, gravestone symbolism, tear catchers, and many other aspects of Civil War and then Victorian mourning rituals and customs.