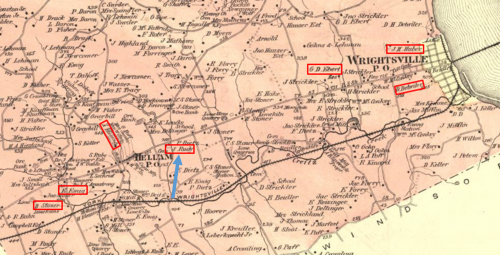 Back in September, I wrote a blog post about Dr. E. A. Jelks of Quitman County, Georgia, who had purchased a farm horse during Brig. Gen. John B. Gordon’s march from York to Wrightsville during the Gettysburg Campaign. He had purchased a horse taken from the Jacob Rudy farm east of Hallam, Pennsylvania, along the turnpike between York and Wrightsville. Years later, he sent U.S. currency to the family (Mr. Rudy was by then deceased) to replace the worthless Confederate currency he had used.

I have since located another, longer, more detailed version of the story, which I present below from the pages of the Harrisburg Telegraph, March 29, 1898.

An Episode of the War That Reads Like a Romance

Many stories of the War of the Rebellion have been written and told, but few are so interesting as the one told in the correspondence herewith printed. The incident on which the story is based was enacted in Hellam township, York county, a few days before the memorable battle of Gettysburg, and the hero is Dr. E. A. Jilks [Jelks], now a practitioner of medicine in Quitman county, Ga., a town of 1,800 population in Brooks county.

Samuel Rudy, of Hellam, a son of Jacob Rudy, deceased, relates the story of how he, as one of the executors of his father’s estate, had been reimbursed for a horse purchased by a surgeon in General Gordon’s army, while a division [brigade] of that body was passing through Hellam, en route from Wrightsville to Gettysburg [Monday, June 29, 1863]. The following letter, which was written to Postmaster Gable, of Hellam, for information, explains the purchase of the horse with Confederate money and the desire of the purchaser to make good the money if the seller of the horse was unable to realize in the transaction:

My Dear Sir: Three or four days before the battle of Gettysburg Gordon’s division [brigade] of Lee’s army passed your father’s house en route to Columbia, but on account of the burning of the bridge by the citizens of Columbia we were checked at Wrightsville, where we remained for the night and returned in time to participate in the battle of Gettysburg. Our brigade halted for a rest in front of Mr. Jacob Rudy’s house, and while there our troops took some of his stock, which was returned to him by order of General Gordon a day or two after. Mr. Rudy came to the camp and pointed out his horses. But when he came to one of the horses he remarked to the General that he did not claim this one, as he had sold it to one of the surgeons. I am the man who bought the horse. Billy was his name — giving him $200 in Confederate money, for which I took a proper receipt. On our march from Gettysburg the horse cast his shoes and I sold him to a commissary of the division and have not heard from him since. Did you ever hear your father say anything of the transaction and what became of the Confederate money. Mr. Gable writes me that you are his son and that your mother is still living. Maybe she can recall it to mind. I would like to inquire of you if the losses sustained by the citizens of Pennsylvania have been paid by your State. I understood that they have.

Respectfully yours, E. A. Jilks.

On being informed by Postmaster Gable that Mrs. Jacob Rudy still lives, Dr. Jilks wrote that lady the following letter:

My Dear Madam: A few days before the battle of Gettysburg I bought a horse of your husband, for which I paid him $200 (two hundred dollars) in Confederate money, for which I took a proper receipt, and promised him that if he could not use it, that I would make its value good to him. I hear from your son that he could not use the money. As a Christian gentleman I feel that in a moral sense, while not legally bound, I should offer you some compensation for the horse, and if satisfactory will send you a check for $125. Awaiting your reply, I am yours respectfully, E. A. Jilks.

A letter was written [to] Dr. Jilks giving him the information he desired and on Saturday Mr. Samuel Rudy received the following letter, in which was enclosed a draft for $125, in payment for the horse.

My Dear Sir: Enclosed find draft on Bank of Quitman. This, when properly endorsed, you can get cashed at any of your banks. Wishing you all well, I am yours very respectfully, E. A. Jilks

Mr. Rudy called on his attorney, who directed that the Confederate money which Mrs. Rudy has in her possession be returned, and that a letter of thanks be directed to Dr. Jilks.