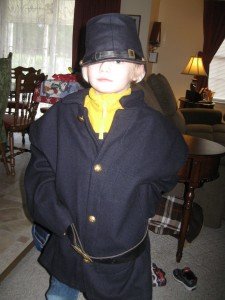 One of my many motivations for studying the Civil War of York County, Pennsylvania, is for the children of the county, including my four York-born grandsons. I wanted to 1) learn as much as I could about the county’s ACW heritage (and I still very much consider myself a learner) and 2) preserve as much of the heritage and stories as possible for use by future generations.

Hence Jim McClure and I co-wrote Civil War Voices from York County, Pennsylvania: Remembering the Rebellion and the Gettysburg Campaign (2011, Colecraft Industries).  We have been gratified by the response since the book’s publication, both in terms of sales and the buzz it has created among people who have asked to submit their own stories and records.

To that end, we have collected more than a dozen period photographs (many never before published), as well as scores of fresh anecdotes and human interest stories for inclusion in what will be a second volume, More Civil War Stories from York County, Pennsylvania. We have cast the net wider, and have discovered many unpublished Civil War letters written by or to York Countians. Many of these are in out-of-state historical societies and repositories, including the University of Missouri, the Virginia State Historical Society, the Wisconsin State Archives, and others. We have also begun poring through scores of letters from York County soldiers which are held in the collection of the U.S. Army Heritage adn Education Center in Carlisle, Pa.

For example, in a recent visit to Richmond, Virginia, I found a very interesting letter written by a nurse at the U.S. Army Hospital here in York describing the response of the community to the needs created by the hospital staff and patients. She tells about some of the efforts to make apple butter for the troops and mentions a York women who was particularly proficient at the craft, making it for hospital use, personal use, and to send to her soldier-boy son down in the Union Army in Virginia.

Later this year, I will spend some time in Washington, D.C. looking through some records at the National Archives and the Library of Congress. I am also aware of some letters in private collections which I am pursuing obtaining permission to publish snippets. I have also found some fresh accounts of York County from its 1863 visitors from Dixieland, the Army of Northern Virginia.

Here’s where you can help! If you have Civil War letters, diaries, journals, photographs of soldiers or civilians, memoirs, documents, etc. please consider sending us photocopies for consideration in the upcoming book (which should be published in 2013). Also, if you are aware of any letters in other states, please let me know. Thanks!