Harrisburg CWRT: “Military Intelligence Staff Operations in the Army of the Potomac” 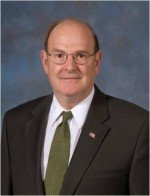 Dr. Bartholomees served 26 years on active duty in the Army before retiring as a colonel to take his current civilian position. While on active duty, he served in the infantry in the US and Germany. His tour immediately prior to being assigned to Carlisle Barracks was in the Pentagon where he served on the staff of the Chief of Staff of the Army in an office that oversaw highly classified programs, and as the Chief of Special Operations Policy and Forces in the Army DCSOPS (Operations division).

Dr. Bartholomees is a distinguished graduate of West Point (1970), numerous service schools, and the National War College (1989). He received his Masters and PhD in History from Duke University (MA 1976, PhD 1978) and taught military history at West Point from 1979 to 1982.