Military Ballooning at the January Harrisburg Civil War Round Table 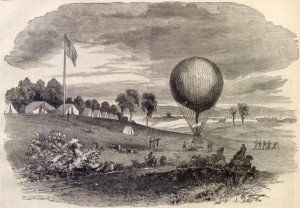 “Military Ballooning and the American Civil War” will the topic of John Augustine at the Friday, January 27, Harrisburg Civil War Round Table. Mr. Augustine will discuss the ascendancy of Thaddeus Lowe as Chief of the U.S. Army Balloon Corps and the administrative nightmare which Lowe encountered as a civilian employee. The lecture will cover the technological developments of Civil War balloons and show how they were used during the 1862 Peninsula Campaign and why they were not used at Antietam or Gettysburg.

A graduate of Gettysburg College, Mr. Augustine served in the U.S. Army before embarking on a thirty-eight year career with the federal government. For the past twelve years, he has been a guide at Gettysburg National Military Park. He and his wife, Nancy, live in Carlisle.