Mexican War soldier implores brother not to join army as a private; not enought pay 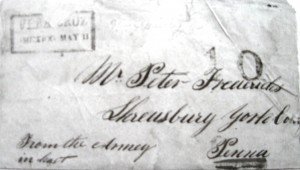 John W. Fredericks served in the U.S. Army during the Mexican War and witnessed the fall of Mexico City. On May 4, 1848, from San Angle, Mexico, (near Vera Cruz), he penned a two-page letter to his brother Peter Fredericks in Shrewsbury in southern York County. The letter is reproduced here courtesy of document collector Jim Brown. The spelling is original.

I recd yours of the 10 March a few days since and was happy to hear of your family and Mothers helths and sorry to here of the old man being much broken but years will bring on old age and wen that comes man is of but little us to his fellow mortel & for my part am but little able at present to render enney assistance to them as I have had three hundred dollars stolen from me 10 days ago and a gold wach worth 1.50 dollars. I will there fore trye to make it up again. a private soldiers wages is not sufficient to keep him in this cuntry. I have ritten to you that I am trying for a lieutenancy in the ten Regts. if the bill pases as a man here will stand a better chance of a commission then one that has not bin here and I have as good a recommendation as eney man in the army can send to his exalency the President and him not noing my political views may have some baring with him. If I get the apointment I can render you some assistance. you stated in your letter that you that you had some idea of coming to Mexico. if you take my advise you never will come to this country as a private soldier. I would rather here of your death as come here as a private. before I got into this situation I never could get in and go ware I pleas as same as an officer or citisen. it is true I have a great deal of business to doe for the wages but the privaleges wich I have and the respect I have shown is a great consideration to me that a private has not. So I advise you not to come. Mr. Sevear arrived here and is gone to Corettero to meet the Mexican Congress. the opinion here is that thare will be a peas concluded but if it is not done soon there will be ware and for my part I wold like to get into another fight or two or rather the taking of Corettero and San Louis Pataso and I wold make a fortian or els lose my life in trying. I had every opertunity in the city of Mexico as I was among the first troops that entered but I thought it was too mutch like steeling. But I have lernt better and if we go t o those two places I shall put my lerning to proper use. Your affectanate brother.

give my love to all and you except the same. 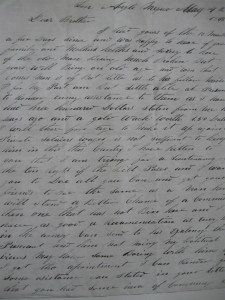 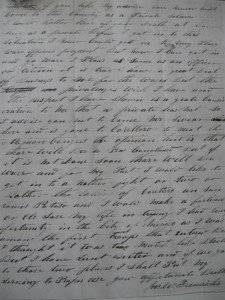