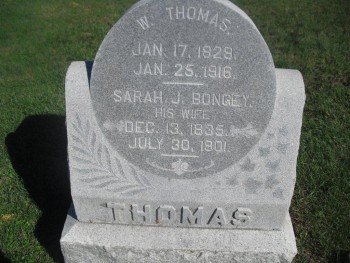 Lena Burial Park in Stephenson County, Illinois, is a long, long way from Manchester Township, York County, Pennsylvania. This photograph from Find-a-Grave’s Diane Boand is illustrative of the post-Civil War trend for former soldiers to move west to seek new farmland and new opportunities. One such example is Washington P. Thomas, a tobacco farmer from Manchester Township who served in Company D of the 200th Pennsylvania Infantry during the war.

Born January 17, 1828, in Manchester Township in north-central York County, Thomas was worth $900 in the 1860 census. He enlisted on August 27, 1864, in York; received his uniform, rifle-musket, and accoutrements at Harrisburg’s Camp Curtin in early September; and became a paid soldier in the Union army. He was listed as being 5′ 8″ tall, with black hair and hazel eyes. His occupations included cigar making and being a florist. He was married to Sarah Jane Bongey (spelled Bonge in some records).

On September 9, he and his regiment left Pennsylvania bound for Bermuda Hundred in eastern Virginia. They saw their first combat on November 19 as part of the Army of the James. Soon thereafter the entire Ninth Corps, including the 200th PA, was transferred to the Army of the Potomac.

The following spring the regiment was involved in the Siege of Petersburg. Although sporadic enemy sharpshooter fire proved dangerous for any man who dared raise his head above the protective entrenchments, the biggest challenge was overcoming boredom and disease. Washington Thomas even had a mundane job; he was the regimental mail carrier.

Thomas was worried; not about the Rebel bullets but about his tobacco crop back home in York County. Unable to secure a furlough from his company or regimental commander, he decided to go up the channel.

All the way to the very top. 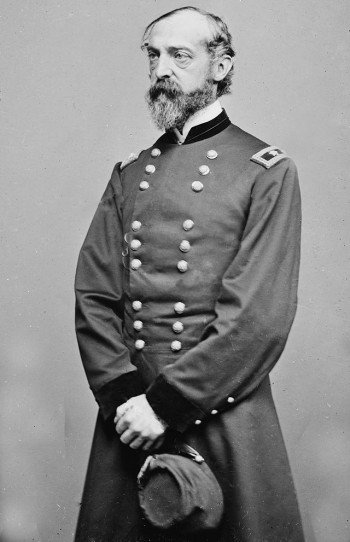 On March 14, 1865, from his camp near Petersburg, Private Thomas wrote a brief letter to the commander of the Army of the Potomac, Major General George Gordon Meade (shown above; Library of Congress photo).

Addressing it to “Mr. General Meed,” Thomas stated that he was “a Pennsylvania Dutchman & therefore dont look for any big words & a poor soljer at that.” He then stated his case. He informed the general that he was a tobacco farmer back home. He had left his crop to join the army but did not have anyone to tend to it except his wife, who was not in very good health. She had managed to hire men to cut it and hang it to dry, but now all the men in the neighborhood had also joined the service. There was no one left for his wife to hire to prepare the tobacco for market.

The big concern was the coming of warmer weather, which would spoil the tobacco. In that case, Thomas would be out $200, which “is too much for a poor man.”

Addressing Meade as “your oner [honor]”, Thomas asked for a “furlow” of 12 to 15 days “nearly to tent to my bissness.” If granted, he would be very much obliged.

“As to my onesty and caricter I leve to any man,” he vouched to the commander. “Ask any man in my richment [regiment] wich is the 200 Pa. W. H. Duhling is my Capten. Co D is my company.” He would leave the matter in Meade’s hands, and enclosed a letter from his wife discussing the situation with the tobacco. He reiterated, “I remain your unworthy soljer.”

“Washington Thomas is my name general,” he penned. “I hope your oner will excuse me for writing thes few imperfect lines to you. The reson I apele to your oner for a furlow is becaus I had not intended to put in for a furlow untill I got the inclosed letter & now if I wate till my turn comes in it will be to late. The wether is getting to warm to leve tobacco lay without being tended too. This is the reson why I ask your oner for a furlow without wating to get in rotation in the regt as the generly give the furlow.”

He sent the letter to General Meade.

There is no record that he received his desired time off to return home to his tobacco crop.

The 200th was involved in the deadly fighting on March 25 at Fort Stedman in which several York County soldiers perished. Thomas survived and was mustered out with his regiment on May 30, 1865, at the expiration of their nine-month term of duty.

After the war, he and Sarah moved to a farm on Waddam Township in Stevenson County, Illinois.  Research by Dennis W. Brandt suggests that Washington Thomas returned home and died in York borough on January 25, 1916. He is buried near Lena, Illinois, as noted in Find-a-Grave.