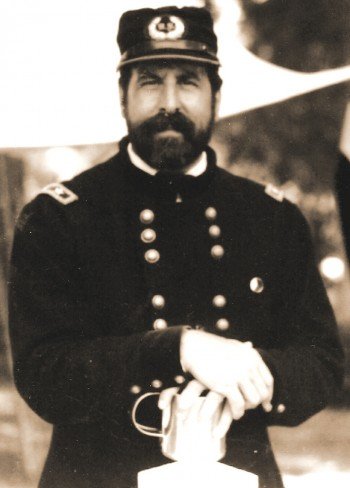 Living historian Michael A. Riley will appear at the February 19, 2014, monthly meeting of the York Civil War Round Table. He portrays Union Major General John F. Reynolds. Commander of the I Corps of the Army of the Potomac since September 29, 1862, he was a West Point graduate, and had had an illustrious military career up to the Gettysburg campaign. One of the Union Army’s most respected senior commanders, he played a key role in committing the Army of the Potomac to the Battle of Gettysburg and was killed at the start of the battle. Reynolds was born in Lancaster, PA.

The first-person presentation is free to the public and everyone is welcome. The meeting will be on Wednesday, February 19, 2014 at 7:00 p.m. in the auditorium of the York County Heritage Trust, 250 E. Market St, York, Pennsylvania.

Author Michael A. Riley is a native of Lancaster, Pennsylvania, and is a member of Co. E., Thirtieth Pennsylvania (First PA Reserves), following in his great-grandfather John B. Riley’s footsteps. He has been researching and lecturing on the life of John F. Reynolds for over 25 years. He is the author of “For God’s Sake, Forward!” Gen. John F. Reynolds, USA. A commercial roofing salesman by trade, he was hired in the summer of 1992 to act as a consultant and double to actor John Rothman for the motion picture “Gettysburg”. He is the founder of the White Rose Civil War Round Table in 1997 which became the York Civil War Round Table in 2007. He lives in Lancaster, Pennsylvania with his wife Rebecca.