Loucks Mill was a major Confederate camp site in 1863 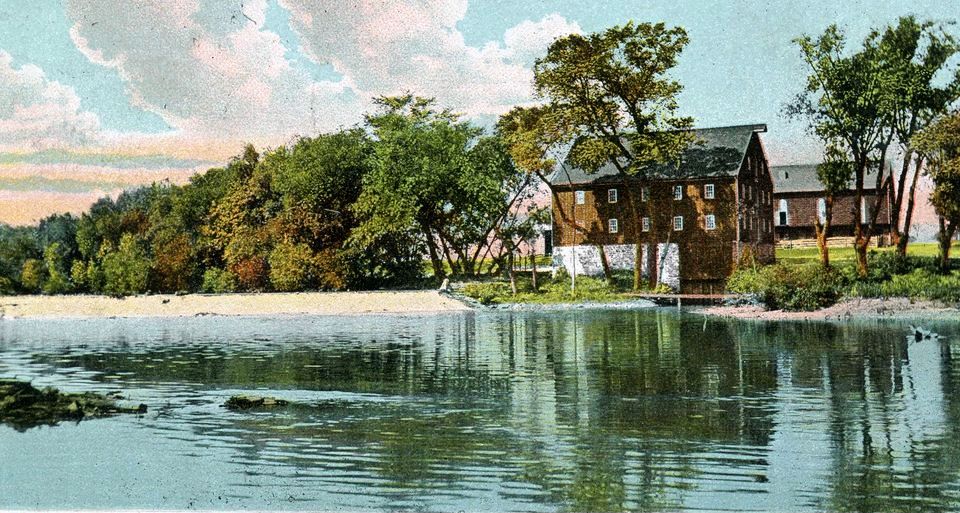 The Civil War-era Loucks Mill along the east side of Codorus Creek north of York, Pa., was destroyed in a fire in 1864 and was replaced by a larger facility. This old postcard shows the location of the mill and mill dam.

This 1938 aerial photograph shows the Codorus Creek to the left-center, with Loucks Road running east-west and Loucks Mill Road and Sherman Street intersecting it from the south. Zachariah K. Loucks and Henry I. Loucks co-owned a large grist mill along the Codorus which was operated and managed by the Small brothers. The Loucks family also owned other mills and properties, including a chop mill along Mill Creek off of today’s Loucks Mill Road.

Land owned by Z. K. Loucks and nearby property owned by Samuel Hively were the campsites of the First Louisiana Brigade, the much-feared “Louisiana Tigers” of Harry T. Hays. This brigade’s reputation for unruliness was so great that Jubal Early during the Gettysburg Campaign never allowed them to camp in a town – they were always kept on the outskirts.

The general area of one of Loucks’ mills is now marked by the San Carlos nightclub. In the above Google photo, Mill Creek runs right to left toward the bottom of the photo and Codorus Creek is to the left. Some of the Tigers camped near the railroad tracks in the general vicinity of Eden Road. There is no remaining evidence as to which specific regiments camped where, as the Tigers were somewhat scattered, with elements farther north guarding the P.A. & S. Small mill and some on Diehl’s Hill accompanying the Louisiana Guard Artillery, a battery that had unlimbered and pointed its guns directly at downtown York.

Z. K. Loucks later claimed that “100 officers and 1,000 privates” each received a haversack full of flour from his mill, enough to fill 25 large barrels. His land was devastated, despite Jubal Early’s orders not to harm private property. All the fences were taken down and burned for firewood, his 20 acres of fields were trampled and his 1863 crop of wheat and oats destroyed, and other damages done. 25 tons of hay were taken to feed the Louisianians’ horses, including the nearby artillery battery. He hit up the government for $1155 in damages, and he and his brother asked for another $550 for 15 acres of lost crops on land they co-owned near the mill.

An even bigger loss was coming. The old two-story mill, distillery, and sawmill were destroyed by fire on April 29, 1864. However, a five-story brick mill was built on the site during the fall of 1864, at a cost of $30,000, and it had the capacity of 125 barrels of flour per day, a massive amount compared to most mills of the era. It was leased to the firm of P.A. & S. Small for much of the latter half of the 19th century.

Both of the Loucks owned properties in Pleasureville on Mount Herman and were quite active in the social and business network of the day. Z. K., an ardent Republican and former Whig, was a director of the First National Bank in 1863, and later owned what is now the Horn Farm in Hellam Township. He was a member of the board of directors and the York County Agricultural Society. In 1867, he turned over daily management of his mill and farm to his New York-educated eldest son, Alexander W. Loucks.

Zachariah Loucks lived into the early 20th century, but his family name lives on with Loucks Mill Road and Loucks Road, both well known in the York area. A large number of his descendants still live in York County.