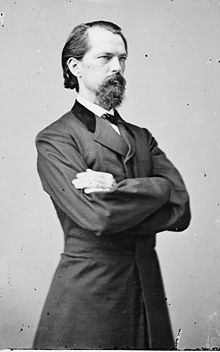 Brigadier General John Brown Gordon was the only Confederate general to reach the Susquehanna River, watering his horse in the river on the morning of Monday, June 29, 1863, after failing the previous evening in his quest to seize the long covered bridge between Wrightsville and Columbia, Pennsylvania. Hastily organized Pennsylvania emergency volunteer militiamen had defended the river crossing on Sunday evening long enough so that civilian teams could prepare the bridge to be torched after the soldiers retreated eastward to Columbia. Gordon’s men had tried unsuccessfully to extinguish the bridge fire but no buckets or water containers could be found in the partially deserted town. When the wind shifted as a summer storm approached, flaming embers caught several lumberyards along Wrightsville’s riverbank on fire. Soon, the entire town was under threat as the inferno grew in intensity and the remaining residents produced a large supply of buckets and pitchers. Gordon quickly ordered his men to form a bucket brigade and pass water uphill from the canal and the river to the town, where other Rebel soldiers climbed on roofs to douse hot spots. The Confederates labored for several hours to save Wrightsville.

After the fire was out, Mrs. Mary Jane Rewalt, accompanied by an attendant, approached General Gordon in the throng and offered her thanks for saving the town. She was a newlywed whose husband, a surgeon, was off in the Union army in Virginia. Mary Jane was also the daughter of the town’s chief burgess, Republican politician James Magee. She was staying in her father’s home, which was one of the many structures the Rebels had saved. According to John Gordon’s postwar reminiscences, “…she sought me, in the confusion which followed the destructive fire, to express her gratitude to the soldiers of my command and to inquire how long we would remain in Wrightsville. On learning that the village would be relieved of our presence at an early hour the following morning, she insisted that I should bring with me to breakfast at her house as many as could find places in her dining-room.” According to Gordon, he arrived to “a bountifully supplied table” the next morning where he and his officers enjoyed a home-cooked breakfast.

Gordon never said where he slept on Sunday night before returning to the Rewalt house but it was his custom to pitch a headquarters tent near his men. However, a local legend in Wrightsville, passed down in the mid-20th century by a later owner of the Magee house, is that the Georgian took a room on the home and spent a restless night. That story, however, does not match Gordon’s recollection of the event.

In the late 1940s, a few years after World War II ended, Atlanta author Allen P. Tankersley was researching what would be his award-winning biography, John B. Gordon: A Study in Gallantry, which he later published in 1955 with his own Whitehall Press. He contacted Judge Christian B. Kline, a Wrightsville barrister who then owned and occupied the old Magee/Rewalt house at 247 Hellam Street.  Kline narrated the following brief account to Tankersley, who recorded it in his book (page 124):

“For saving her home from being destroyed by fire, Mrs. Rewalt invited Gordon and some of his staff to spend the night in her guestroom. Gordon was given an old-fashioned bed over which hung a canopy. When the lights were extinguished and all were ready for sleep, by strange chance the canopy fell, enveloping Gordon and almost scaring him out of his wits. He thought that his hostess had laid a trap to kill him. After disentangling himself, he lighted a lamp and found, to his relief, that he had been the victim of nothing worse than an accident. The next morning at the breakfast table he carefully avoided any mention of the incident. It was long after the war that Mrs. Rewalt learned of her guest’s discomfiture.”

Gordon, a known storyteller himself, never related this incident in his memoirs or, as far as known, during any of his wildly popular national lecture tours. He did encounter Mrs. Rewalt again well after the war when he was staying at a hotel in Madison, South Dakota, during his tour. Mrs. Rewalt and her husband Luther by then had moved to that town after leaving Wrightsville. It is certainly possible that Gordon revealed the incident to Mary Jane during their breakfast at the hotel and she later related it to family or friends back in Wrightsville, who passed the story down through the years to Judge Kline.

But, if so, did Gordon make up the story of the fallen canopy, as he was wont to exaggerate for the sake of embellishing his stories to make them more interesting?

Or, did Gordon, as commonly believed, sleep in a tent in a field on the outskirts of town and then ride into Wrightsville early in the morning to call on Mrs. Rewalt for the promised breakfast? That is how the incident has been portrayed in paintings and illustrations, as well as in most histories including my own Flames Beyond Gettysburg: The Confederate Expedition to the Susquehanna River, June 1863 (Savas Beatie LLC, 2009).  Did Judge Kline invent the story to entertain and appease an inquiring Southern biographer? O, was he the victim of a longstanding legend with little basis for fact?

John Gordon, two weeks prior to his visit to Wrightsville, had written to his wife that he had premonitions of dying in combat at Second Winchester. He again wrote to her during the battle of Gettysburg that he had qualms about the heavily fortified Union position on East Cemetery Hill. Perhaps he was suffering from a bad case of nerves during the Gettysburg Campaign and, indeed, had a discomforting nighttime encounter with a fallen canopy in the guest room of a York County house that he was too ashamed to mention to anyone except to Mrs. Rewalt decades later? 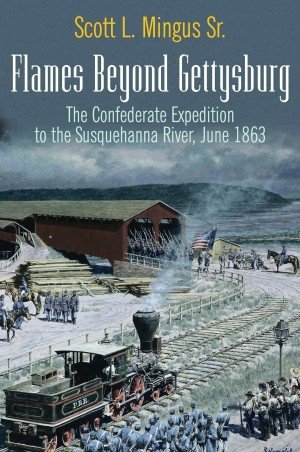