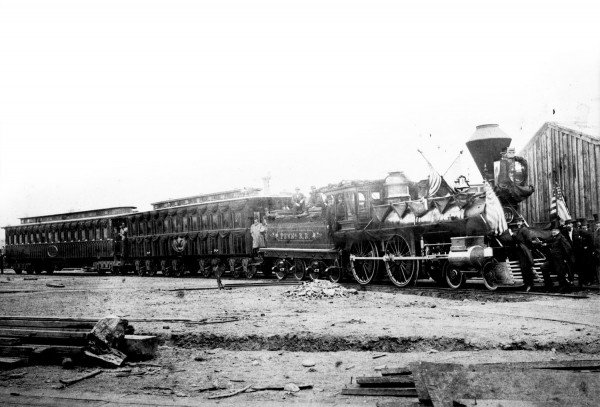 On April 21, 1865, in a cold, steady spring rain, a funeral train carrying the remains of slain President Abraham Lincoln solemnly steamed through York County on the tracks of the Northern Central Railway. Thousands of mourners and curiosity seekers, many with their hats respectfully  in their hands, lined the railroad to catch a glimpse of the special nine-car train carrying the caskets of the president and his late son Willie (who had been disinterred in Washington to be taken for reburial next to his father).

Knowing the train would pause in York to refill the locomotive with water, Chief Burgess David Small and other civic leaders began making plans while the town’s leading ladies prepared a large floral wreath. Politics were temporarily set aside for the day; Small’s York Gazette newspaper had for years openly challenged the late president’s war policies. However, news of the assassination had shocked both Republican and Democrat alike.

A Philadelphia newspaperman was among the gaggle of reporters who accompanied the train on its mournful journey from Baltimore through Glen Rock and Hanover Junction to Harrisburg. Here is his account of its brief stop in York, taken from the Philadelphia Inquirer of April 22, 1865. 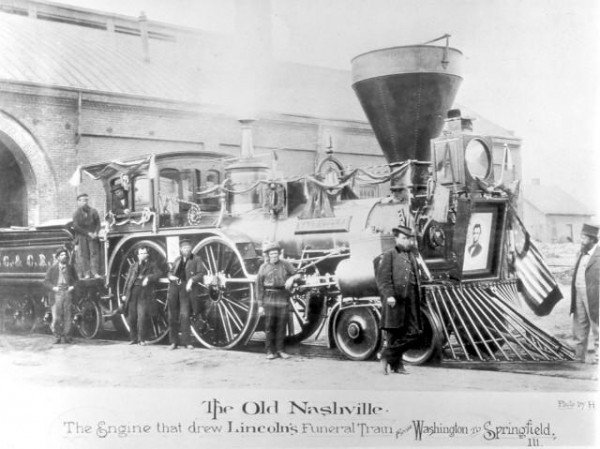 The locomotive in this photo is one of several that drew Abraham Lincoln’s funeral train from Washington to Springfield, Illinois, is not the same engine as in the previous picture. As many as 42 different locomotives were used during the journey. The train never exceeded 20 mph in order to guard against mishaps or derailment. More than a million mourners are said to have paid their respects to the late president.

“Just at dusk we reach York, entering the town amid the tolling of bells. The buildings are draped, and the citizens crowding one another down to the very rail over which our iron horse seems to plow his way. We halt at the depot, to find thousands of people with uncovered heads in the rain.

“A brass band from the United States [Army] Hospital plays a mournful dirge. Dr. [St. John W.] Mintzer’s infantry are ranged along the track to keep the way clear. The bells all over the city toll, and minute guns from the hill side add to the impressiveness of the occasion. While we were taking on water the crowd open a passage from the station, and a half dozen ladies in black come through to the cars. 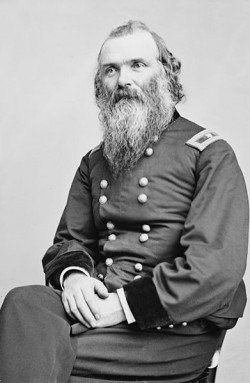 “Generals [Edward D.] Townsend and McCollum [Daniel C. McCallum, pictured above, was the director and superintendent of the U.S. Military Railroad] meet them, and in a moment a soldier brings down a large waiter around which is a wreath of white roses, camelias, and the most delicate and fragrant exotics. In the center of the wreath is a flag, the blue field made of violets, the stars of white violets, and the red stripes of geraniums, making one of the most beautiful natural pictures ever prepared for such an occasion.

“The ladies of York sent it, and General McCollum broke over his rules, and allowed them to enter the sacred car. They carried it to the coffin, and as the tears chased one another down their fair cheeks, they left it upon the cold bier. Not a word was spoken. There were a half dozen present who had gone in with them, but no dry eyes came out.

“The fragrance from those violets seemed like incense from Heaven. A neat tribute, plain but coming from the heart, will weigh against the costly decorations of the millionaire; a starry flag, of violets laid upon the corpse by the ladies of York. Old men, tottering to their graves, with rain pattering upon their bald heads; wounded soldiers hobbling to the roadside to show their love for him who sleeps before them: old women sobbing as they they had lost their firstborn; fair maidens brush away the tears, and men hold up their little ones to see the car which contains the remains of the people’s friend. ‘He was crucified for us!’ exclaims an old colored man, but the shrill whistle sounds, and we leave a scene that can never be forgotten by those who witnessed it.

“Such feeling, such sincere grief, had never manifested itself before since the death of Washington.  There have been no speeches made to-day, no sermons, not a word spoken, the silence of the funeral cortege speaks with an eloquence that must reach the hearts of men of adamant.

“In our train are over a hundred and fifty men and no ladies. Need I tell you that there hardly has been one who did not betray his emotions with tears. As it grew dark the crowd of people at the stations seemed to be larger as we drew near Harrisburg, which we reached at 8:15 P.M. in a drenching rain.” 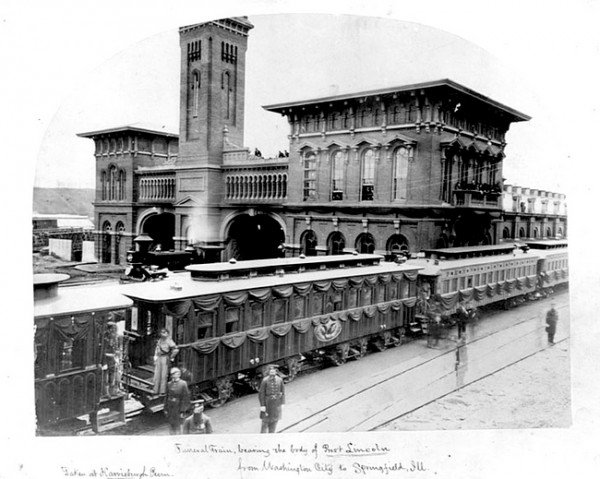 Lincoln’s funeral train is shown during its stopover in downtown Harrisburg, Pa.

The funeral train would pass through more than 180 towns in seven states on its way to Springfield, Illinois, where the president was to be buried on May 4, 1865. The 13-day journey totaled more than 1,600 miles. The dark maroon railcar which carried Lincoln’s coffin reportedly was destroyed in 1911 by a prairie fire near Minneapolis, Minnesota. It had passed through several private owners since the long trek from Washington. 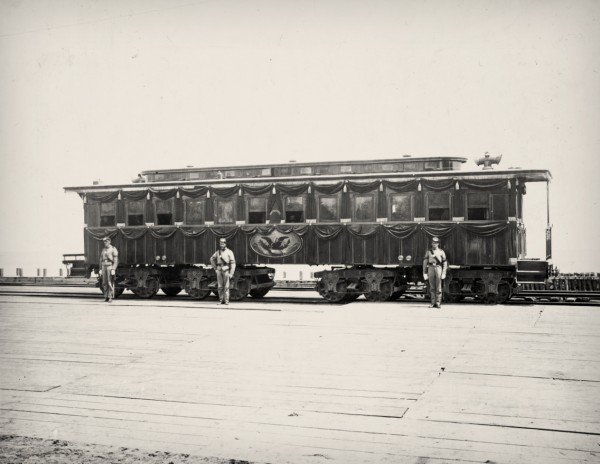 Photos courtesy of the Library of Congress and the National Archives. There are no known photos of the funeral train while stopped in York, although the town had several photography studios.

A group of investors is trying to raise funds to construct a replica of the locomotive and funeral car in time to retrace the April 1865 route on its 150th anniversary. Presumably, York would be included in the stops for this replica train.

In 2002, author Scott D. Trostle wrote a book on the journey of the original funeral train.

Past yorkblog.com posts also of interest: