Knights of the Golden Circle made post-war “appearance” 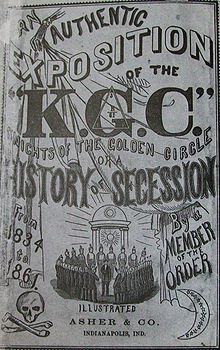 During the 1863 Gettysburg Campaign dozens of Confederate soldiers, including generals Jubal Early and J.E.B. Stuart, reported encountering Pennsylvania farmers who frantically made strange hand gestures, often while waving yellow pieces of printed paper and/or exclaiming certain words. It did not take long for the Rebels to make the connection that these farmers had not taken their horses, cattle, sheep, or other livestock and valuables to safety.

It turns out that visitors from New York City had earlier made the rounds among the farmers, selling membership cards, signs, and passwords to a purported secret Confederate sympathizing organization known as the Knights of the Golden Circle. However, that group did not exist in any degree in south-central Pennsylvania and the people “had been badly sold” according to General Early. The sellers were scam artists.

Republican newspapers were quick to seize upon the calamity, ridiculing the buyers which tended to be strongest in heavily Democratic regions of Adams and York counties, particularly North Codorus and Codorus townships.

A few years later, the memory was still strong in the region, and the specter of the KGC made one last appearance. In this case, it was a conniving Lancaster County man who took advantage of the war-time tale.

Here is the story, as written in the Columbia Spy on February 2, 1867…

A black man named Isaac Davis lived in the Tow Hill section of Columbia. Apparently hearing the wartime stories of the KGC, he had tried his hand at duping the citizens of York County.

According to the newspaper account, Davis “represented that he was a man of large property, and extensively engaged in the purchase of cattle. Before proceeding in this rascality, he by some means obtained the passwords  and signs of the Knights of the Golden Circle, knowing that the members of that Order were numerous in York county, he made that the field of his operations.
“Whilst passing along a public road, he observed some hieroglyphics upon a barn, the same having been placed there when the Rebels were in the county. He paused, contemplated a moment, and then proceeded to the owner thereof, and worked his fingers, and uttered some unintelligible “gibberish.” The result–a steer came forth, and Isaac went his way rejoicing. He was successful in many a similar transaction, until he ‘came to grief’ in Columbia.”

Eventually a constable from York traveled across the Susquehanna River to arrest Isaac Davis, finding his at Dietrich’s Hotel in downtown Columbia. Davis, however, took off running with the constable in hot pursuit. The lawman fell down, yielding the advantage to his prey. He desperately ordered Davis to halt and fired a warning shot, but the thief had soon disappeared into the black Tow Hill section of town despite the shouts of numerous bystanders to halt. After a long search, Davis remained on the lam.

The York officer called in McGinnis, an expert thief catcher nicknamed “old Ironsides,” who was well acquainted with the most used hiding places in the region. McGinnis “made a bee line” for the alley in back of Cottrell’s store. He immediately entered a nearby warehouse and climbed a ladder to a loft where the merchant stored old stove-pipes and other miscellaneous items. Davis came down, and McGinnis marched him into downtown and turned him over to the York constable.

There is no record of how much time Davis served in jail for his trickery and thievery.