“Jubal’s in the Valley: The Battle of Monocacy 150th Anniversary” at York CWRT on May 21 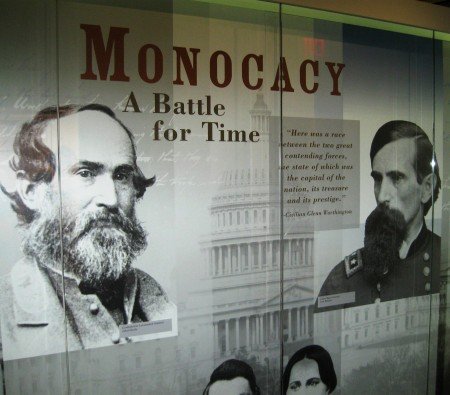 Historian and author Gail Stephens will be the featured speaker at the monthly meeting of the York Civil War Round Table on Wednesday, May 21, 2014, at 7 p.m. The presentation topic of the evening will be “Jubal’s in the Valley, Summer 1864.” The meeting will be held in the auditorium of the York County Heritage Trust at 250 E. Market St. in downtown York, Pennsylvania. The presentation is free to the public and everyone is welcome.

This Power Point lecture is about the six weeks of Gen. Jubal Early’s  1864 campaign and the battle that saved Washington. July 9, 2014 marks the 150th Anniversary of the Battle of Monocacy.

In the fourth summer of the Civil War, a small Confederate army came close to carrying off the improbable-the seizure of Washington, DC. In June 1864, Lt. Gen. Jubal Early slipped away from the works around Richmond, where Lee and the Army of Northern Virginia faced Grant and the Army of the Potomac, and moved rapidly through the Shenandoah Valley into Maryland with an army of 16,000 veterans. Lee’s orders to Early, take Washington, which had been stripped of veteran troops to reinforce Grant. The Union high command in Washington refused to believe the first reports of a Confederate presence north of the Potomac and took no action. The Union commander in Baltimore, Maj. Gen. Lew Wallace, was convinced of the threat, and mustered a small force near Frederick, Maryland where on July 9 he and his men managed to hold Early’s army an entire day, though outnumbered two to one. Warned by Wallace, Grant swung into action and put a corps onto steamships to reinforce Washington. The race was on. Though the Confederates did not succeed, this little known campaign is one of the most exciting and potentially most momentous of the Civil War.

Gail Stephens worked for the Dept. of Defense for 26 years, retiring in 1994. Upon retirement, she began to study the American Civil War. She volunteers at Monocacy National Battlefield near Frederick, Maryland, lectures regularly on various Civil War topics, including Monocacy, Maj. Gen. Lew Wallace, the 1864 campaign and gives battlefield tours. She has written articles on Lew Wallace and Early’s 1864 invasion of the North for various Civil War publications. Her book on Wallace’s Civil War career, “Shadow of Shiloh,” published by the Indiana Historical Society Press in October 2010, won the Civil War Forum of New York City’s William Henry Seward Award for best Civil War biography of 2011.