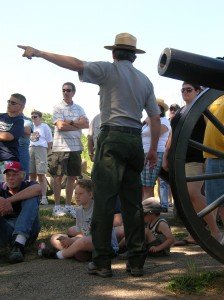 Programs take place at famous sites like Little Round Top, Devil’s Den, Culp’s Hill, Cemetery Hill and the Soldiers’ National Cemetery.  The programs focus on the battle, key moments of the fighting, the aftermath, and the Civil War experience.  In addition to rangers, costumed interpreters will present programs called “Visits to the Past,” portraying men and women who witnessed and participated in the events of 1863 in Gettysburg.

“Join the Army” is a program for children ages 6 to 12 where participants “enlist” in the army and learn something about what it meant to be a soldier in a Civil War regiment.  Gettysburg’s Junior Ranger program is a free family-oriented activity that allows children ages 5 to 13 to become Junior Rangers by completing an activity guide as they visit the park and museum.  In the park’s Museum and Visitor Center, programs using “Hands-on History Carts” offer opportunities for kids to try Civil War dress-up games, parlor games, and other fun.

For those who prefer indoor programs, the park is offering free daily programs in the classroom at the park Museum and Visitor Center – “The Battle Overview” and, on weekends, “Monuments of Gettysburg.”

In addition to summer programs offered daily, rangers will present special anniversary battle walks on July 1, 2 and 3, to explore key events.  These in-depth programs are three hours in length.  In addition to these longer anniversary battle walks on July 1, 2 and 3, rangers are also offering an extensive list of “Real-Time” programs that follow and explain the battle in chronological order and as close as possible to the real time when the events described took place. The programs range in length from 30 minutes to an hour.  “Real-Time” programs involve minimal walking, although visitors will need to make short drives by vehicle between program locations.

On Sundays at 6 p.m. Rangers offer “Long Remembered” walks that look at the aftermath of the battle in the town of Gettysburg and Abraham Lincoln’s visit to give the Gettysburg Address.  These programs start at the historic Lincoln Train Station on Carlisle Street in Gettysburg and include a special focus on the David Wills House.

After August 12 Rangers continue a more limited program schedule until mid-November.  To find out what’s being offered before and after the summer schedule, start your visit at the Park Museum and Visitor Center and pick up a daily schedule.

Begin your visit to Gettysburg at the Gettysburg National Military Park Museum and Visitor Center, 1195 Baltimore Pike.  For more information and a list of these programs go http://www.nps.gov/gett.  For advance tickets to the film, cyclorama painting program, and museum exhibits, call 877-874-2478 or go to www.gettysburgfoundation.org

Gettysburg National Military Park is a unit of the National Park Service that preserves and protects the resources associated with the Battle of Gettysburg and the Soldiers’ National Cemetery, and provides an understanding of the events that occurred there within the context of American history.
Katie Lawhon
Management Assistant
Gettysburg National Military Park
1195 Baltimore Pike, Suite 100
Gettysburg, PA 17325
phone:  717/ 334-1124 x3121
fax: 717/334-1891
www.nps.gov/gett

“From the Fields of Gettysburg” blog: http://npsgnmp.wordpress.com/