Johnny Sisson, a small, wiry farmboy in Dover, Ohio, was a rather rambunctious, determined lad. He likely stood out among his peers in rural Tuscarawas County in the eastern part of the Buckeye State. Sisson was a native of England, born on New Year’s Day in 1849 at Horncastle in Lincolnshire along the eastern coast. When he was six years old, he moved with his mother Martha to the United States, settling near relatives in Canal Dover. He was raised in a modest house at the intersection of Second Street and Wooster Avenue.

After Johnny’s mother died, his uncle John Adlard became his legal guardian. It was 1861, and the Civil War had just erupted. President Lincoln called for 75,000 men to join the army to put down the rebellion. Twelve-year-old Johnny ran off from the Adlard home and tried to join the army, despite his age. He was denied. Adlard responded by punishing the lad, bonding him to John Putnam, a farmer near Wilmot in Stark County.

Undaunted, Johnny ran off again in September to try to enlist. He and fellow farmhand John Robinson furtively made their way to Canal Dover, where they slept overnight in a haymow. In the morning, they walked over to Camp Meigs, a new army base established on the Tuscarawas County fairgrounds. When Ardlard heard that his rebellious, but determined nephew had again tried to join the army, he had Johnny committed to the county home.

Through the persistent efforts of Elijah Meese, a director of the county house, and John Mackey of Newcomerstown, Sisson was released into Meese’s care as a farmhand. An accomplished clarinet player and drummer, Johnny later joined Hayden & Welty’s Band, a popular community organization in Canal Dover. The bandsmen appeared at rallies in Dover, Newcomerstown, and other nearby communities to “beat up” their drums to stir patriotic volunteers into joining the ever-growing war effort.

Johnny saw his beloved music as another chance to run off and join the army.

Now, he just needed the right timing and opportunity.

According to the New Philadelphia Daily Times of February 9, 1937, “By playing the clarinet well, he managed to get another opportunity to enlist at Newark, this time in Company I, 51st O.V.I.” Johnny Sisson, at the tender age of 15, finally was a soldier in the United States Army. According to his enlistment papers, he was 5 feet, 7 inches tall, weighed only 125 pounds, and had dark brown eyes.

But, Johnny did not to be an army musician, a noncombatant who stayed in the rear lines and helped with the wounded. He wanted to fight the Rebels.

When the recruits raised to replenish Company I marched to Dover to train and outfit at Camp Meigs, Sisson transferred to Company D as a rifleman. He was the youngest infantryman in the entire 51st Ohio.

The regiment had been in the field for more than a year. The new soldiers joined their veteran comrades at Blue Springs near Cleveland, Tennessee. Johnny fought in the early battles of the Atlanta Campaign, serving in Second Brigade, Second Division, in the Army of the Cumberland’s Fourth Corps. Among the major engagments of the 51st OVI, under Col. Richard W. McClain, were Tunnel Hill, Buzzard’s Roost Gap, Resaca, Dallas, New Hope Church, Kennesaw Mountain, Peachtree Creek, and the subsequent Siege of Atlanta.

Later that year, Pvt. Johnny Sisson and the 51st OVI were part of Maj. Gen. George “Pap” Thomas’s forces that fought in Tennessee at Franklin and Nashville. Later in the war, the IV Corps moved to Huntsville, Alabama, before returning to eastern Tennessee to block mountain passes in the event that Robert E. Lee’s retreating Army of Northern Virginia attempted to head west. In June 1865, the 51st went to New Orleans, Louisiana, before being moved to Texas. Sisson mustered out in October in Victoria, Texas, with his regiment. According to newspaper accounts, “Mr. Sisson was under fire in 15 major engagements and altogether participated in 60 skirmishes and all.” He returned to Dover as a man, despite his youth.

At the age of 26, he married 16-year-old Ellen B. Keyser, and together they raised a son William John and daughter Anna Marvell (born July 12, 1880). A naturalized citizen of the USA, John often worked away from home as a general laborer on the railroad in Fletcher and Van Wert, Ohio, and in Fort Wayne, Indiana. However, his health was never good. Sisson finally received a military invalid pension in April 1889 (Application # 698127, Certificate # 561516) citing damage to his heart and lungs as well as rheumatism from prolonged exposure. 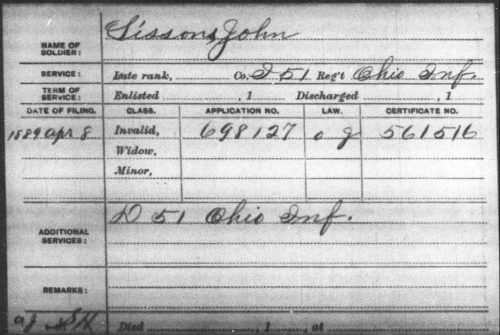 He was active in the Grand Army of the Republic and was the local post commander in Dover. As an old man, he insisted on walking in the annual Memorial Day parade instead of riding in cars like many other veterans.

Little rebellious Johnny Sisson, who twice ran off to join the army and ended up as an accomplished combat rifleman, was my great-great-grandfather.

In the 1930s, John and Ellen Sisson were living on a $100/month pension. My mother (whose middle name was also Marvell like her mother and grandmother) as a child at times visited her great-grandparents. John, in frail health and almost deaf,  suffered from what is now deemed as Post-Traumatic Stress Disorder. He would often slip into a delirium and refight the Civil War, shouting out encouragement to his long ago comrades. My late Mom had vivid childhood memories of some of these more dramatic occurrences.

At the age of 88, John D. Sisson died at his modest one-story home on St. Clair Avenue in New Philadelphia on February 6, 1937.  He was the last remaining member of Ricksecker Post No. 469, Grand Army of the Republic, bringing an end to Dover’s long tradition of having its Civil War veterans lead the annual parade on Memorial Day. The Rev. Paul F. Ebert of Grace Lutheran Church officiated at the service, delivering a fine eulogy “based on a review of what an English-born lad did for his adopted country in its peril.”

Sisson was buried with full military honors in the soldier’s lot of Maple Grove Cemetery, alongside of Ellen who had died 14 months earlier. Commander Edward Kneubuehl of Dover Post 205 of the American Legion presided over the martial services, assisted by Aaron R. Funk. Dr. Max Swaweker somberly played Taps as twenty military veterans from across the region bowed their heads to honor their deceased comrade.

Thank you, Great-great-grandpa Johnny Sisson, Civil War veteran, for your service to our country.

Do you have an ancestor in the Civil War? Feel free to post a comment and tell us about him.