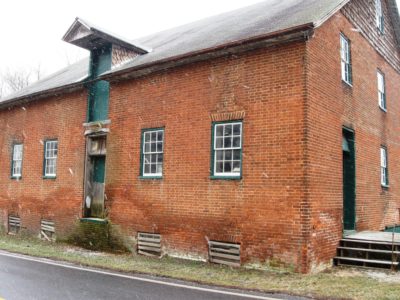 View of the old Henry Myers mill located on Green Valley Road northeast of Jefferson, Pennsylvania. On the afternoon of June 30, 1863, Brig. Gen. Fitzhugh Lee‘s Confederate cavalry of Stuart’s division rode past this once thriving mill en route to Hanover Junction (they would pause near John Epley Ziegler‘s house and his father’s old tavern before changing course for New Salem).
Some of Lee’s troopers paid a visit to the mill, but found it not to be the lucrative prize they had hoped. Nearby Cold Spring shopkeeper Conrad Myers reported losing 50 bushels of flour he had stored in the mill, but his losses pale compared to millers and farmers elsewhere in York County.

Another view of Henry Myers’ old mill (all photos taken by me on January 16, 2008, between 12:15 – 12:30 PM). The nearby Myers Road is named for him, and leads toward what is now the paper mill town of Spring Grove, Pennsylvania.
Henry Myers built the first grist mill at this location in 1820. Constructed of wooden logs, it was powered by an 8-foot diameter overshot water wheel. In 1852, he sold the business to William Spangler, who tore down the small wooden mill and constructed the 3.5-story brick building seen in the photographs. According to the website MillPictures.com, he utilized a much larger and more powerful 17-foot overshot Fitz waterwheel to turn the heavy grindstone. That necessitated a stronger flume of incoming water, so he constructed a mill dam and large mill race. 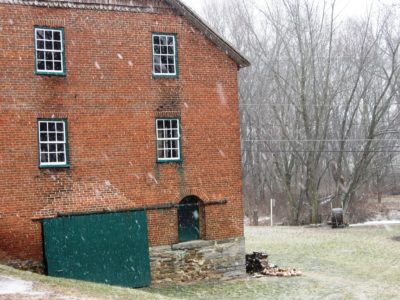 After years of declining business in the 20th century, the mill was purchased in 1951 by Harry Hoff. It was closed a few years later when maintenance of the mill race proved too expensive. It, and the water wheel, are now long gone. 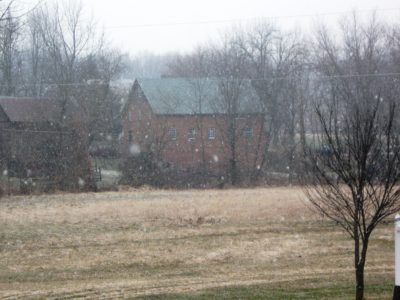 View of the back of Myers’ Mill as seen from the tiny hamlet of Cold Spring, once a thriving rail stop on the Hanover Branch Railroad (the trace of which runs between the meandering creek and the village). 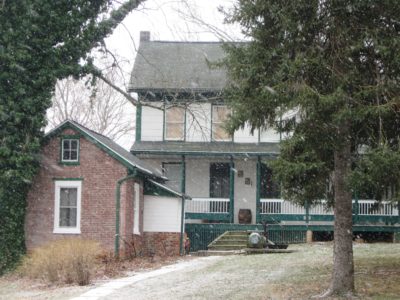 The miller’s house, with the characteristic Pennsylvania Dutch “dawdle house” beside it (where the old folks could live independently but still within the care of the family).