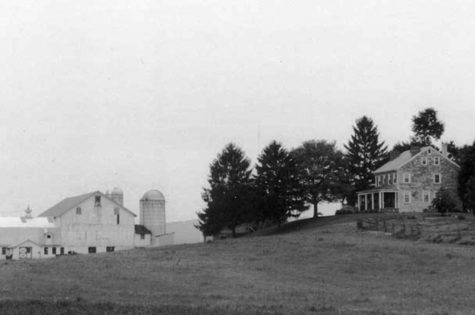 The Skirmish of Wrightsville was one of the largest military engagements in the history of York County, Pennsylvania, at least in terms of the number of soldiers engaged. On Sunday evening, June 28, 1863, more than 2,000 veteran Confederate soldiers attacked about 1,500 entrenched Union militiamen, who withdrew across the Susquehanna River to Columbia before burning the Columbia Bridge behind them. That act prevented the Rebels from entering Lancaster County.
During the Civil War, the Jacob Huber family lived on this farm. In the 1850 Census, the surname is spelled “Hoover.” Jacob Huber, 63 during the Gettysburg Campaign, was married to a woman ten years his junior (Magdalena). They had a daughter Barbara and a son named Jacob, both which were gone from the home by the summer of 1863. The farm was very prosperous, and Huber is listed in 1850 as being worth $55,000, a massive sum for that day and age.

Copyright 2007, Scott Mingus and Tom Poston, all rights reserved. Map of the June 28, 1863 skirmish of Wrightsville, Pennsylvania. No reproduction without written permission.

This map shows the Confederate positions near Wrightsville and the town’s defenses. Note the Huber farm. Two 3″ Rifles from Capt. William A. Tanner’s Courtney Artillery unlimbered on the farm and fired several shells at the Federal militia as they withdrew from the trenches cutting through Huber’s fields. Tanner reported firing a total of 40 rounds from his two sections of artillery (the right section was on the Strickler farm just south of the York-Wrightsville Turnpike (today’s Lincoln Highway / Route 462). Several of those shots came from the Huber farm and wounded members of the 20th and 27th Pennsylvania militia.

COLONEL; On the morning of June 27, according to orders, I reported to General [John B.] Gordon, and, after marching 27 miles, encamped for the night.
On the morning of the 28th, took up line of march (passing through York) for Wrightsville, and, after arriving within some 3 or 4 miles of said place, encountered and engaged the enemy, operating according to General Gordon’s orders. Repulsed them, and pursued them through the town of Wrightsville, capturing several prisoners. The bridge across the Susquehanna River having been burned by the enemy, I was ordered to encamp about half a mile from town.

On the morning of the 29th, left Wrightsville; took up line of march, passing through York, and encamped about 2 miles from that place. 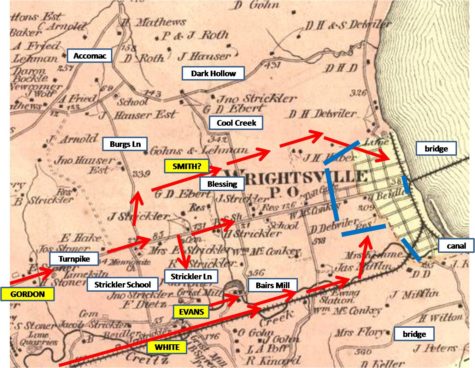 The Huber farm is at the northwestern angle of the Union defenses as shown on the above map of Confederate movements. The base map is the 1876 Atlas of York County, Pa., and many of the farms are the same owners as in 1863 during the Confederate push toward the Susquehanna River. Note that by 1876, Jacob’s son and namesake, Jacob H. Huber (1845-1876) now owned the sprawling farm. He would die prematurely the same year that the atlas was published. When the Rebels came to Hellam Township in June 1863, J. H. Huber was an 18-year-old student at the York County Academy, and his aged father and mother still lived on the farm.

The home had once been a major stop on the Underground Railroad when it was owned by the Mifflin family before the Hubers acquired it.

Before the fighting at Wrightsville, this farm was occupied by Union soldiers of the 20th and 27th Pennsylvania Volunteer Militia. The 20th had evacuated Hanover Junction, Pa. the previous day when Rebel cavalry attacked the railroad junction.

Twenty-five years after the skirmish, a member of the 27th PVM returned to Wrightsville with his family. They toured the old grounds and he reminiscenced about his war-time experiences. He showed his party the Huber farm, “where some of us appropriated a quantity of cream and milk from a spring house…. We plead the statute of limitations and war’s demoralization–the lacteal fluid would have soured before the family returned, or been gobbled up by the Rebs anyhow, and besides it was our only depredation during the whole campaign.”

The Courtney / Henrico Artillery was organized on July 8, 1861, in Henrico County near Richmond, Virginia. It took its name from its first captain, Alfred Ranson Courtney. The battery quartered at the Richmond Baptist College artillery barracks before heading to the field. It served in Stonewall Jackson’s forces in the 1862 Valley Campaign and participated in many of the Army of Northern Virginia’s major battles throughout the war before disbanding later in the war. The battery had 90 men during the Gettysburg Campaign, and almost half served the guns and reserve limbers on the Jacob Huber farm.

Captain William A. Tanner had assumed command of the battery earlier in 1863 following the promotion of Capt. Joseph W. Latimer to major. Tanner would be badly wounded at Bristoe Station on October 14, 1863, and then captured at Warrenton six days later (Lt. Benjamin C. Maxwell, who may have commanded the section on the Huber farm, assumed command). Tanner would be a prisoner of war for a full year before being exchanged. His injuries, however, disabled him and prevented him from resuming his field duty. In February 1865 he received an honorable discharge and a reassignment to the Invalid Corps.