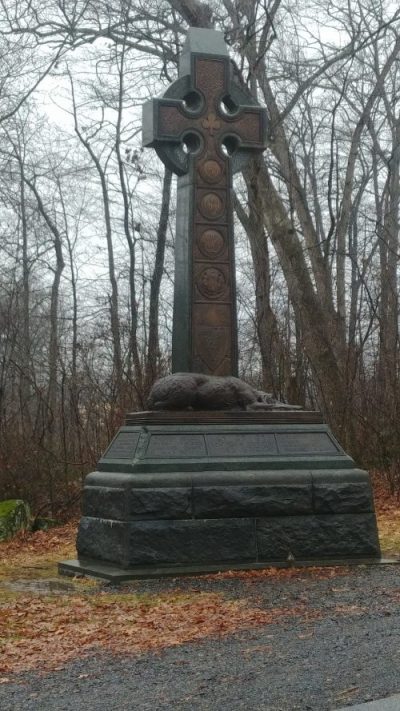 Press release: York Civil War Round Table
Hello fellow Roundtable members.  I hope you are enjoying the Spring temperatures that we have experienced this past week.  It’s a nice preview to what I hope will be great weather to come.  As we get ready to “March” into spring, we will be marching along with the Irish Brigade, one of the most famous units in Civil War history.  Fittingly, this presentation is on St. Patrick’s day, a day when we celebrate some of our nation’s Irish culture.  Join us this Wednesday, March 17th at 7 pm as we welcome Licensed Battlefield Guides Chris Army & Rick Schroeder and learn more about this famous brigade.  As we have done for the past several months, we will be streaming our program with the assistance of the York County History Center via Zoom and Facebook Live on their page.  To access the Zoom meeting, go to York Civil War Round Table | York County History Center (yorkhistorycenter.org)
The Irish Brigade – The “Fearless Sons of Erin” presented by Licensed Battlefield Guides Chris Army & Rick Schroeder.
Their presentation will focus on this famed brigade of immigrants including commanders, participants, and some of the major battles in which the Sons of Erin participated. Ultimately, the horrific casualties suffered on various battlefields left the brigade decimated. While the writings and information we have on this fine brigade is not prolific, their spirit lives on in the monumentation and stories from the battlefield. Come, celebrate the deeds of the Fighting Irish!
Chris Army has been a Gettysburg student for about as long as he can remember! His study of the Battle of Gettysburg over the last 40+ years led to his becoming a Licensed Battlefield Guide in 2015. Chris has led tours for folks ranging from GNMP Park visitors, to CW Roundtables, to West Point Cadets. Chris is a member of the faculty of the Gettysburg Foundation’s “In the Footsteps of Leaders” leadership development program and the former chair of the Adams County Historical Society. He has written articles for Blue & Gray and America’s Civil War Magazines. He regularly appears on Gettysburg and Leadership related podcasts. He lives in Dover, PA with his wife, Connie.
Richard (Rick) Schroeder became a Licensed Battlefield Guide (LBG) in July, 2016. He is a summa cum laude graduate of the University of Notre Dame in 1977. He graduated from Northwestern University Medical School with High Honors in 1981. He is both a Phi Beta Kappa and Alpha Omega Alpha honor society member. He completed a five-year orthopedic surgery residency at Indiana University Medical Center in Indianapolis, Indiana in 1986. He completed two post-residency fellowships; one in knee surgery at Medical City Hospital in Dallas, Texas, and the second in orthopedic trauma surgery at Shock Trauma in Baltimore, Maryland. Rick has been the Director of Orthopedic Trauma at Conemaugh Memorial Medical Center’s Level I Trauma Center in Johnstown, Pennsylvania since 1987. His orthopedic practice centers on complex fracture care and reconstruction.
Battle of Gettysburg Irish Union soldiers York Civil War Round Table