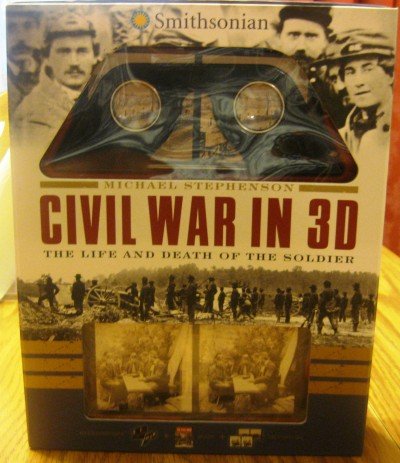 The Smithsonian has recently released a wonderful new set of 35 stereoscopic images of the Civil War, a sturdy metal 3D viewer, and a full color photo book by long-time military historian Michael Stephenson. Entitled Smithsonian Institution’s Civil War in 3D: The Life and Death of the Soldier, this is a delightful set for the Civil War buff on your Christmas or birthday gift list.

First, the viewer and the 3D images should provide hours of entertainment for the buff, and especially for the younger crowd. When I was a kid, my grandparents had an antique stereoscopic viewer and more than 100 cards, many of exotic locations. I spent considerable time viewing the 3D images and dreaming of the locations, and was particularly enthralled with the military images. The editors and staff at the Smithsonian have assembled 35 images, many from the institution’s own collection, with a rich, diverse mix of subject matters and 3D compositions. Most show soldiers in everyday activities in camp life. Some of the images are familiar to the veteran Civil War buff; others are much more obscure but combined they reveal a glimpse of the everyday life of the soldiers, both blue and gray. 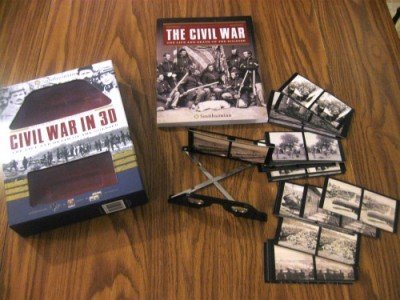 The set comes handsomely packaged in a chipboard box with two cutouts to view the contents. The 3D cards are much smaller than the traditional 19th and early 20th century antique stereoscopic cards, but when placed in the viewer and adjusted for focal length to get the 3D effect, they work well.

It would be nice if the Smithsonian in the future would perhaps consider selling “booster” sets with additional images, not only more Civil War photographs but perhaps other historic items and subjects from their vast collection. 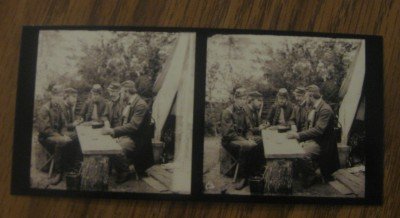 Scenes in the packaged set include those of soldiers (such as the group of officers shown above) in various activities such as building winter quarters, preparing their meals, bathing in a river deep in Virginia, waiting at a railroad station to be transported to the front lines, building roads, following the wagon trains from battle to battle, and recuperating from wounds and illnesses in military hospitals. On the back of each card are details on the particular setting depicted on the obverse. 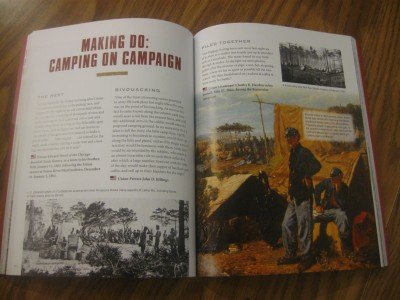 As interesting as the 3D cards may be, the book is perhaps the most valuable part of the collection. New York author Michael Stephenson is the former editor of the Military Book Club and has written several books, including the well received National Geographic’s Battlegrounds: Geography and the History of Warfare.

The book, like the card collection, focuses heavily on the everyday life of the  soldier, both Union and Confederate, throughout the American Civil War. Stephenson spices his interesting and well written narrative with personal accounts from the soldiers, particularly as culled from their letters and diary entries. These offer a snapshot of the life of the soldier – his daily food, his habitat when not on campaign, how they battled the boredom and routine of mundane camp life, life on the march with the expectation of impending battle, their loneliness and homesickness as they missed their loved ones, and their attitudes toward their respective governments and the seemingly never ending war effort.

The book itself  is 176 pages in length, printed on glossy C2S enamel paper using high quality offset lithography. Each page contains at least one photo, often more, and are carefully chosen to give a broad, sweeping overview of what the soldiers must have experienced during their time away from their homes.

Smithsonian Institution’s Civil War in 3D boxed sets is priced at $34.95, a good bargain considering the entertainment value and the breadth of the images in the book. It is available at many leading brick-and-mortar book stores, as well as on line at amazon.com and other Internet retailers.

If you enjoy looking at 3D images of Civil War scenes, another great choice would be the Center for Civil War Photography’s Gettysburg in 3D. Sample images can be viewed on the Civil War Trust’s website by clicking here.