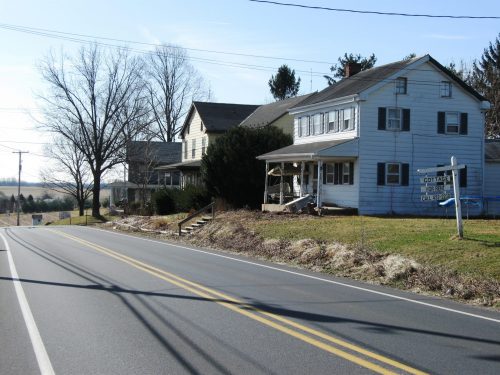 Mount Top is a tiny hamlet tucked in northwestern York County, Pennsylvania, not far from Dillsburg. Today, it’s a whistle stop, as cars blow through the place on State Route 74. Few if any of the passersby are aware (or care) that they are traveling the same route as parts of Major General J.E.B. Stuart‘s cavalry during the Gettysburg Campaign of the American Civil War.

On the late afternoon of July 1, 1863, a long line of Confederate cavalrymen passed through this quiet hilltop community en route to Dillsburg from their campsite at Dover. In command of this column was veteran Brigadier General Fitzhugh Lee, one of the South’s better cavaliers. He led his own brigade of Virginia horse soldiers, as well as another Virginia brigade under Colonel John R. Chambliss, Jr. Perhaps 2,500 soldiers rode through Mount Top, and foraging patrols scoured the countryside in all directions, rounding up horses and mules, as well as seizing supplies and food of material value to the Old Dominion saddle soldiers.

Yahoo map showing the location of the rural hamlet of Mount Top, Pennsylvania, with the known routes of the two main Confederate cavalry columns superimposed on the modern maps. The exact movements of J.E.B. Stuart’s Rebels can be traced through a careful study of post-war damage claims filed by the farmers in the region. Foraging patrols ranged far and wide in the Mount Top region, and virtually every back road saw at least one body of Confederate cavalry stopping from farm to farm looking for fresh horses, as well as provisions and food.

Here is a partial list of those Pennsylvanians living in or near Mount Top who lost horses to Fitz Lee’s men on July 1. A few of these men had also been raided by Maj. James  H. Nounnan‘s battalion of Brig. Gen. Albert G. Jenkins‘ s West Virginia mounted infantry on June 29.