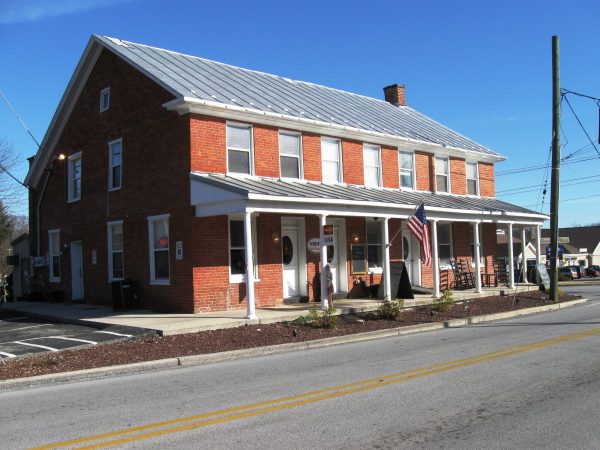 A tavern in 1863, this business continues to thrive in the tiny crossroads community of Rossville, Pennsylvania. On the day that I stopped by, a bluegrass band was playing in front of a lively crowd. The place has great ice cream as well! If you visit the ski resort / play area at nearby Ski Round Top, then this should be on your list of places to visit.

Shortly after leaving Dover, Pennsylvania, in the early afternoon of July 1, 1863, Maj. Gen. J.E.B. Stuart of the Confederate Army of Northern Virginia divided his cavalry force into two wings. One group, consisting of the brigades of Brig. Gen. Fitzhugh Lee and Col. John R. Chambliss, Jr., rode through Harmony Grove and Wellsville to reach the rendezvous point at Dillsburg. The other wing, under Stuart’s direct control, was the brigade of South Carolina planter Wade Hampton III and a lengthy and slow-moving train of 125 captured Union supply wagons.It headed up the Carlisle Road aka Old State Road (parts of which are today’s Route 74) through the crossroads at Rossville.

Over my Christmas break, I have made a detailed analysis of the movements of Hampton’s force, and it’s very clear that he sent out patrols that ranged as far east as four miles from the main column, which kicked up a massive cloud of dust on the Carlisle Road that could be seen for miles according to eyewitnesses.

Before arriving in Rossville, At least one large column of Hampton’s troopers rode up Bull Road, scouring the area for horses and mules.

Just as Stuart’s advance scouts reached Rossville, [Union] Sergeant John M. Griffith was returning to his home in that village. He was a member of Company H, Eighty-seventh Regiment, Pennsylvania Volunteers, and had been slightly wounded in Virginia at the Second Battle of Winchester about two weeks before. He was not dressed in military uniform, but the Southern soldiers believed that he had been in the Union army and demanded that he should accompany them. They made him go with them to Dillsburg, to Carlisle, and even to Gettysburg, which they reached in the evening of the next day.

The bulk of Hampton’s Confederate cavalrymen tarried in Rossville for a rest break and presumably to allow the scattered foraging patrols to rejoin the brigade. The wagon train parked just north of town on the Moore farm, where the mules and horses devastated the farmer’s ripening crops.

It was not the first time Rossville had been hit by the Rebels. Brig. Gen. Albert G. Jenkins‘ patrols had rode into town on June 29, two days before Stuart’s much larger column arrived. To the south, along Harmony Grove Road, merchant William R. Smith lost 3 barrels of whiskey (126 gallons), 20 gallons of brandy, 10 gallons of ginger brandy, 10 gallons of wine, 5 gallons of old rye whiskey, 5 gallons of cherry brandy, 30 pairs of shoes, 2 pairs of boots, 25 hats, notions, 40 lbs of tobacco, pocketknives, knives, forks, spoons, 10 yards of calico, bolts of cassimer, various cottonades, 50 yards of muslin, 50 yards of miscellaneous cloth, large quantities of groceries, a dozen horse brushes, a dozen curry combs, 20 bushels of corn, 125 bushels of oats, and 3 bushels mixture. His neighbor David Spangler visited the store on the morning of June 30 and found “nearly all the goods had been taken out.” 6 acres of grass destroyed while the cavalrymen’s horses grazed during the raid.

Now on July 1, Smith’s farm was struck. He lost a 14-yr-old bay, 10-yr-old bay, 4-yr-old bay, bridles, halters taken from his stable. Neighbor John D. Slothauer‘s horse also taken from stable. [Smith would later be one of six men accused of murdering a black man left behind by the Rebels who was accused of aiding in the horse thievery business. See author Dennis Brandt’s fine book on the 87th Pennsylvania, From Home Guards to Hometown Heroes for the full account of this incident.]

Shortly after Hampton’s Brigade left, a group of late-arriving Rebel foragers went door to door in the Rossville region, demanding “the best provisions their larder afforded.” Some of the citizens complied, and soon the Confederates were laden with all kinds of delicacies. However, before they could enjoy their bountiful feast, a lookout spotted half a dozen Union troopers riding toward the village. The Federals were from a patrol that had been shadowing Hampton’s column for some time, keeping an eye on Confederate movements. The Johnnies raced to their horses, mounted quickly, and headed northward out of town to rejoin their brigade.

The Yankees spurred their horses and chased after the Rebels, up past Tempest Gardner’s house. According to a local 19th-century historian, George Prowell, “shots were exchanged, just as the Southerners were leaving the village. None of these shots took effect.”

However, the sudden gunfire surely brought some excitement, and perhaps some concern, as the Civil War, for however a brief moment, had come to Rossville, Pennsylvania.