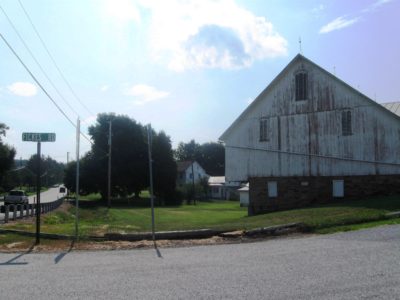 Thousands of dusty Confederate cavalrymen from Virginia passed this old farm near Wellsville, Pennsylvania, on the afternoon of June 30, 1863, during the Gettysburg Campaign. The veteran brigade of Brig. Gen. Fitzhugh Lee, accompanied by famed Maj. Gen. J.E.B. Stuart, earlier rode through Wellsville, where the men sang merrily and serenaded the amused citizens. Still in a jovial mood, no doubt, the column slowly trotted past this farm, owned then by 30-year-old Jacob Brenneman and his wife Elizabeth (Berkheimer). Patrols peeled off in various directions, searching for horses (foragers found a large number less than a mile north of the Brenneman farm on the adjoining property of Jonathan C. Griest on the west side of Fickes Road). That’s State Route 74 on the left.

Jake Brenneman apparently was more fortunate than his victimized neighbors. He filed no damage claims after the war, suggesting that he likely had taken his horses into hiding or had escorted them to safety in Harrisburg or Columbia. Most of the other farmers along Fitz Lee’s path indeed claimed the loss of at least one horse. It is highly likely that Rebels searched the Brenneman barn / stable but came away empty.

The farm dated from the early 1800s when Edward Wells purchased the property (his family was the namesake of nearby Wellsville). The first Methodist religious services in the Wellsville vicinity were held starting in 1830 in this farmhouse, as well as nearby dwellings of Abraham Harman and Mrs. Wolgemuth before the Methodists found a place of worship in an old wooden one-room schoolhouse located a half-mile northwest of Wellsville. Edward Wells moved to Lafayette, Indiana, in 1834 and sold the property to Martin B. and Elizabeth (Asper) Brenneman, who in turn transferred it to their son Jacob.

Jake’s father Martin was not as fortunate. He had moved to a farm near Kralltown, where Rebel raiders (likely from Wade Hampton’s brigade) during the wee hours of July 1 visited his farm as they rode down toward Gettysburg. He lost a 7-year-old bay-colored horse valued at $125, plus a halter worth $2.

Jacob Brenneman was born June 12, 1833, in Warrington Township. He married Elizabeth Berkheimer about 1856. Among their children was H. C. Brenneman, who was five years old when the Rebels disrupted the family in the early summer of 1863. H. C. grew up to become the long-time principal of the old York High School.

For more on Stuart’s ride through western York County, pick up a copy of my book.