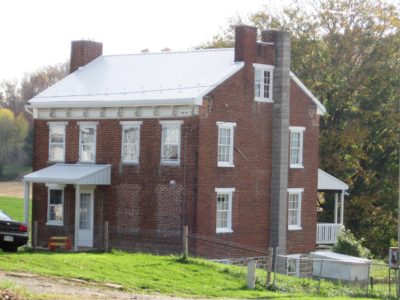 The farmhouse of Henry Hoff III during the Civil War; all photos by Scott Mingus taken in November 2009. Taken from Zeigler’s Church Road looking west.

This typical Pennsylvania German farm is tucked in a shallow valley paralleling Zeigler’s Church Road (foreground) in North Codorus Township in southern York County, Pennsylvania. Many of the old 19th century farms in this region still have the original houses, summer kitchens, and the characteristic huge bank barns which are often painted red. Other than electricity, indoor plumbing, and the cars and trucks parked in the farmyards, not much has changed since Major General J.E.B. Stuart‘s Confederate cavalrymen rode through this scenic and tranquil rural region on Tuesday, June 30, 1863 during the Gettysburg Campaign.

During the Civil War, the prosperous farm was owned and occupied by Henry and Rosanna Hoff and several of their children. A portion of Stuart’s lead brigade, that of Brigadier General Fitzhugh Lee of Virginia, passed by this house in the afternoon. When a squadron peeled off from the dust-clouded column and rode down to the Hoff property, the family knew trouble was approaching.

Here is the story of Rosanna Hoff, excerpted from an article I wrote for The Gettysburg Magazine. 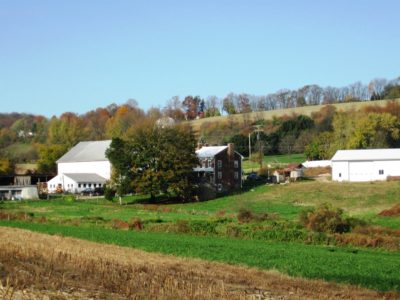 The Hoff farm was among the nearly 1000 farms in York County known to have been raided by the Confederate Army of Northern Virginia during the Gettysburg Campaign. A nearly complete database of these losses compiled by Scott Mingus will soon be available on the website of the York County Heritage Trust.

A mile from John Ziegler’s countryside tavern, Henry Hoff, his wife, and three children from their upstairs window watched Stuart’s three-hour procession past their farmhouse. It must have been a fascinating sight, especially for the kids, to watch the military procession from the relative safety of a few hundred yards.

To the family’s consternation, suddenly eight men from the rear guard unexpectedly trotted over to their house and dismounted. They entered the house and ransacked the first floor and the nearby springhouse. They seized several horses and stole clothing, food, and supplies. Then, the Rebel raiders discovered Hoff’s distillery. They grabbed several jugs of York County whiskey, entered a nearby woodlot, and soon were inebriated.

Rosanna Hoff was upset because one of the stolen horses was a particular favorite. Against the stern advice of her husband, she waited until dark and then dressed in black. She silently walked into the woods, found the Rebels sleeping off the whiskey, and retrieved her prize horse. However, she only managed to take back the single horse and make her escape back to the farmhouse. After the war, Henry filed a border claim for $450 for the loss of a 5-yr-old sorrel, 5-yr-old sorrel mare, and a 6-yr-old gray mare. He was never compensated by the state. 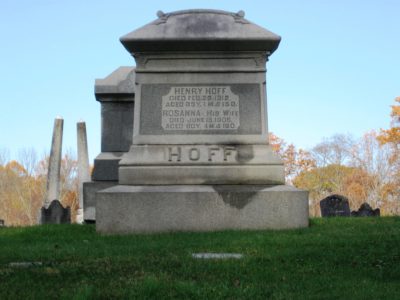 Henry and Rosanna Hoff are buried about a mile from their farm, which is visible from the cemetery of Ziegler’s Church.

Henry Hoff III was born on January 11, 1829 on his father’s farm in North Codorus Township. He was a son of of Henry Hoff Jr. and Susanna Serff Hoff, who are buried not far from Henry and Rosanna He spent his life as a farmer; married Rosanna Emig in 1850 and raised a large family. Many of their descendants still live in York County. Henry died on February 26, 1912 in the nearby village of Seven Valleys. Rosanna Emig was born on January 26, 1827 in Chambersburg, Pennsylvania on Franklin County to John Jacob Emig and his wife Catherine Carbaugh Emig. The plucky Rosanna died on her farm in North Codorus on June 15, 1906.