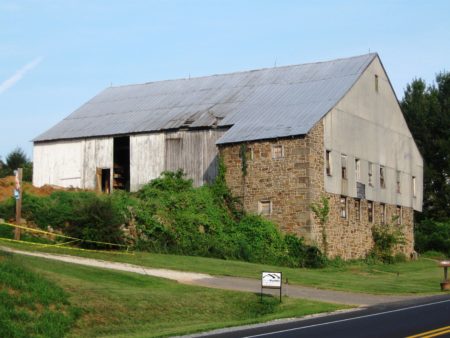 This old hilltop barn sits alongside York Road between Dover and Dillsburg, Pennsylvania. Thousands of cars drive past it every day, with almost none knowing (or caring I presume) about its historical significance.

Back in 1863, more than 1,000 Confederate cavalrymen under Brigadier General Wade Hampton III of South Carolina slowly rode past this massive wooden edifice in the mid-afternoon of Tuesday, July 1, 1863. They were escorting a captured Union wagon train of 125 loaded supply wagons, each pulled by a brace of mules. Another 250 or so extra mules were being herded behind the column (Stuart had cut the mulepower in half to shorten his column’s length, although it also cut its speed). Also in the entourage was fabled Confederate cavalry Major General J.E.B. Stuart, who was likely the biggest star in the galaxy of Rebel generals who visited York County that summer. The barn sat on the farm of Aaron Firestone, who very much rued Stuart’s ride past his farm, for a patrol peeled off the column and rode into the farmyard, with mischief on their minds.

Aaron Firestone was born March 17, 1825, in Washington Township, Pennsylvania. He was from a large family that had been in northwestern York County for several generations. His education was secured there in the best schools the district afforded, and there he married Martha Bowman, daughter of John and Martha (Herr) Bowman. a daughter of Martha and John Bowman, a miller who owned a farm two and a half miles south of Dillsburg. Their children were: John B., who married Ida Shearer and resided at Harrisburg; C. R.; Emma A.; and Jacob A., who married Adda Moody, and was a farmer of York County.

After marriage Aaron Firestone bought a farm of 160 acres in the southernmost part of Carroll Township, right at the border with neighboring Warrington Township. During Stuart’s march through York County on July 1, 1863, a party of Wade Hampton’s foragers roamed his farm, discovering two horses and leading them away to be pressed into the service of the Southern Confederacy. Firestone later filed a border claim with the state asking for $320 in compensation for the loss of his 3-year-old and 6-year-old bays.
After the war, Firestone became the owner of several other farms in the same county. For a period of forty-six years he engaged in active farming operations, retiring then to spend the remainder of his days in the enjoyment of many comforts afforded to him by ample means.

His death occurred at Dillsburg. York County, in 1903. His wife had preceded him, July 29, 1892, while the family still lived on the homestead. Mr. Firestone was considered one of the leading citizens of his locality, and his death was a loss to the community.
Aaron’s son Professor John B. Firestone later was a pillar of the Dillsburg / Beavertown area in the late 1800s, serving as an educator and banker.