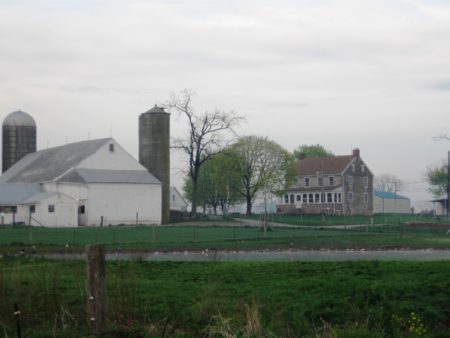 The old George Eyster, jr. farm is at 1760 Taxville Road near the intersection with Derry Road in West Manchester Township, York County, Pennsylvania.

For several hours on the evening of Tuesday, June 30, 1863, thousands of Confederate cavalrymen rode through a part of West Manchester Township en route from the Battle of Hanover toward Dover, Pennsylvania. Commanded by colorful Virginia-born Major General J. E.B. Stuart, the long column entered the township north of York-New Salem, crossed the Gettysburg turnpike (U.S. Route 30) and followed N. Emig Mill Road to S. Salem Church Road, where it turned and headed up to Dover. The troopers came into the township in three distinct brigades, with the final column, that of Brigadier General Wade Hampton III of South Carolina pausing at a particular farm to rest and regroup while the leader slept (more on that in an upcoming post). Patrols from Stuart’s division scoured the countryside to find horses. Among the many farms where they found success was the George Eyster, Jr. place. 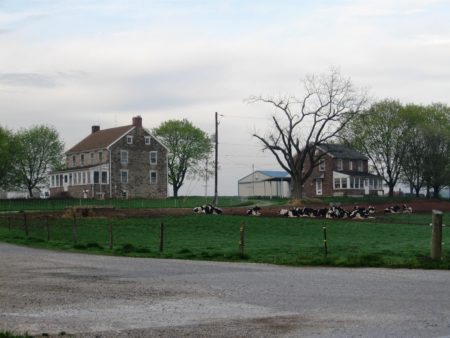 The farm features two large farmhouses, one built in 1845 of field stone construction and the other one in 1945 of kiln-dried bricks.

One of Stuart’s roving patrols rode up to Eyster’s barn about 11:00 PM on June 30. The cavaliers dismounted, entered the stable, and emerged with an 8-yr-old gray horse and a 7-yr-old sorrel. Eyster later filed a claim for $300 for the two missing animals. For Eyster, it was the second time he had been victimized. On a cloudy Sunday afternoon, June 28, a patrol from Major General Jubal A. Early‘s division camped near York passed along Taxville Road. At 5:00 PM, Rebels took a 6-yr-old gray mare and a 4-yr-old chestnut bay mare. It is likely this patrol was from the 17th Virginia Cavalry of Colonel William H. French, which was riding throughout the region west and north of York looking for fresh horses before a severe rainstorm moved into the area.

The Eyster name was (and is) well known in York County. George Eyster, Sr. had been a master craftsman in the late 1700s whose hand-made Pennsylvania long rifles were prized. He owned a 240-acre farm which had a small water-powered boring mill. Original Eyster rifles are still collected and traded at gun shows, and Eyster Sr. has a reputation for superb carvings on his wooden stocks. The vintage rifles sell for thousands of dollars when they can be found.

Eyster Jr. carried on his father’s trade, being listed in the census data as a gunsmith on his 30-acre farm (the one in the photograph). His guns are less frequently traded. The Eysters and their descendants were active members of Union Church in Shiloh.

Across the street from the Eyster farm in 1863 was the farm of Peter Eisenhart (now Derry Park, a popular community gathering place and playground). A 5-year-old sorrel was taken from one of his fields; Eisenhart discovered his loss in the morning.

For more on Stuart’s ride, please see my book.