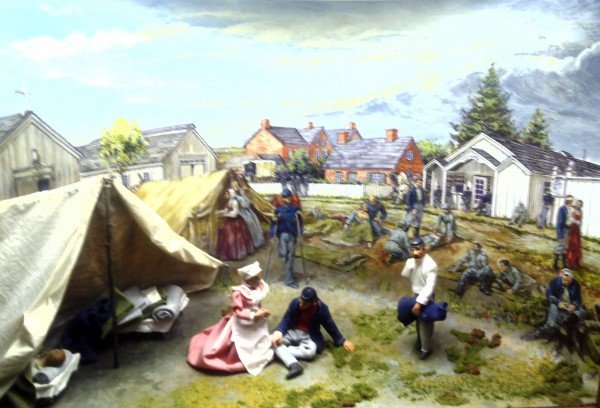 This diorama is on temporary display at the York County Heritage Trust. It depicts wounded Union army soldiers at the Army General Hospital in York, Pa. during the Civil War. The hospital sat on the grounds of what is now Penn Park on W. College Avenue.

More than 14,000 patients received treatment and care at the York facility. It was one of the cleanest and safest army hospitals, with less than 200 men dying there in the course of the war, among the lowest mortality rates of the entire war. Almost 2,000 wounded men from the Battle of Gettysburg were evacuated to York after the railroads were repaired.

Back in 1976, Carl Hatch of York College wrote in the York Sunday News about an old document from the defunct Civil War hospital which was then in an antique shop on E. Market Street. The parchment paper dated from 1864, and was signed by a dozen Federal soldiers, mostly Gettysburg victims, who made a pact that if they survived the war, they would meet in twenty years in 1884 at Niagara Falls to reminiscence.

It’s an interesting story which deserves retold. One of these men was born in York County, moved to Wisconsin as an orphan, fought in the Iron Brigade at Gettysburg, came back to the army hospital in his native county after being wounded, later moved west again, and then finished his life in Wrightsville. Another enjoyed his time in York while in the hospital and returned there after the war to open a successful business. 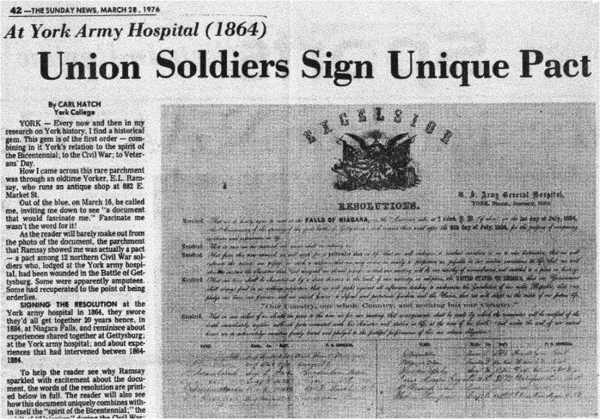 The Sunday News, March 28, 1976, had this image of the old Civil War pact between 12 soldiers who were patients or stewards at the York U.S. Army General Hospital. I found this old clipping in an old Civil War book I recently purchased at an estate auction.

Here is the text of the document, as transcribed by Carl Hatch:

RESOLVED, That we do hereby agree to meet at the FALLS OF NIAGARA, on the American side, at 2 o’clock p.m. (if alive), on the 1st day of July 1884, (the Anniversary of the opening of the great battle of Gettysburg), and remain there until after the 4th day of July, 1884, for the purpose of comparing incidents and experiences of life.

RESOLVED, That in case we are married, our wives shall accompany us.

RESOLVED, That from this time onward, we will work for a particular aim in life, that we will endeavor to conduct ourselves so as to win distinction, that we will cultivate the talents we possess, in such a manner that we may arrive as nearly to perfection as possible in our various avocations in life, that we will strive to sustain the character that God designed we should possess, so that our meeting will be one worthy of remembrance, and entitled to a place in history.

RESOLVED, That our lives shall be characterized by a strict devotion to the land of our nativity, or adoption, the UNITED STATES OF AMERICA, that our Government shall always find in us willing supporters, that we will fight against all influences tending to undermine the foundation of our noble Republic, that “we pledge our lives, our fortunes, and our sacred honors” to defend and perpetuate freedom and the Union, that we will adopt as the motto of our future life “OUR COUNTRY, OUR WHOLE COUNTRY, AND NOTHING BUT OUR COUNTRY.”

RESOLVED, That in case either of us should die prior to the time set for our meeting, that arrangements shall be made by which the remainder will be notified of the death immediately, together with all facts connected with his character and station in life, at the time of his death: “and under the seal of our sacred honor we do acknowledge ourselves firmly bound and pledged to the faithful performance of this our solemn obligation.”

Two of these soldiers, William Frederick Eichar and Theodore D. Bahn, who pledged to lead productive lives and then to meet in 1884 at Niagara Falls had strong York County roots. Here is Bahn’s biography from Gibson’s A History of York County.

“Theodore D. Bahn was born July 14, 1833, on the Dosch farm, half a mile south of East Prospect, York Co., Penn. His parents were Henry and Maria (Dosch) Bahn, and soon after subject’s birth removed to Marietta, Penn.; when he was about one year old they removed to Lewistown, Mifflin Co., Penn., thence to the Comfort Farm, five miles west from Lewistown; thence, in his fifth year, to a farm in Juanita County, and in his seventh year to McAlistersville, same county, where his father engaged in the tanning business, and died in our subject’s thirteenth year.

When Theodore was fourteen, his mother died, leaving a family of six small children, he being the eldest and only boy. All were subsequently well cared for by kind friends, he with his eldest sister being taken into the family of his uncle, Jacob Dosch. At the age of fifteen he removed with his uncle to the then far West, arriving at Galena, Ill., on the 1st of December; thence they traveled by team to Fayette County, Wis., where they settled. He remained with his uncle, working at the carpenter’s trade and farming at intervals, until he was eighteen years of age, when he went into the Wisconsin pineries, where he spent one year working at shingle making; returning again to Fayette County, he worked at his trade and farming, until the spring of 1857, when he removed to Lodi, Columbia Co., Wis., continuing at his trade in the summer and teaching school in the winter until April 18, 1861, when he enlisted in Company H, Second Wisconsin Volunteers, for three months, going into camp at Madison, where the regiment was drilled until the 11th of June, when he, with the entire regiment, re-enlisted for three years (being promoted in the meantime to the position of fifth sergeant) and on the same day embarked for the seat of war.

He participated in the first Bull Run battle, when he received a gunshot wound in the right shoulder; was granted a furlough for two months, returned home and in due time joined his regiment. He participated in all the battles in which his regiment was engaged (except those of second Bull Run and Antietam, at which time he was on detached duty in the engineer corps), up to the battle of Gettysburg, where he was severely wounded in the left side during the first charge of the famous Iron Brigade within thirty yards of the spot where Gen. Reynolds fell. With considerable difficulty and severe pain he reached the court house, then being used as a hospital, where he remained until the close of the battle; he was then transferred to the United States General Hospital, at York, Penn., where he remained until February 11, 1864, when he was pronounced unfit for field service, and transferred to the Second Battalion Veteran Reserve Corps. Company 108, with the rank of first sergeant. He was assigned to duty as clerk in the office of the surgeon in charge of the above named hospital, where he remained until June 11, 1864, when he was honorably discharged.

He returned to his Western home, where, on the 21st of July, the third anniversary of the first Bull Run battle, he was married to Miss Hattie C. Bartholomew. Resuming his trade, he worked for the government at Duvall’s Bluff, Ark., on hospitals for six months; returning again to Lodi, Wis., he pursued his trade until the fall of 1869, when he removed to the city of Milwaukee, where he was engaged in a sash, door and blind factory until the spring of 1872, when he removed to Cedarburg, where he engaged in the same business until the fall of 1874, when he came to Wrightsville, and entered the employ of his brother-in-law, John Beidler, in the lumber and hardware business. In 1880 he entered the millinery, trimming and fancy goods business, in which he is still engaged, with very fair prospects of success. At present he holds the position of Post Commander of Lieut. R.W. Smith Post, No. 270, G.A.R., and is a member of the Lutheran Church and Sunday school.”

What a cyclical life! Born in York County, orphaned and sent out west, back to York as an injured Iron Brigade soldier following the Battle of Gettysburg, off to other states again, and then back to York County to work with his brother-in-law, John Stoner Beidler, whose diaries are in the collection of the York County Heritage Trust.

Theodore Bahn died on April 27, 1912. He and his wife Hattie are buried in Greenwood Cemetery in Lancaster. 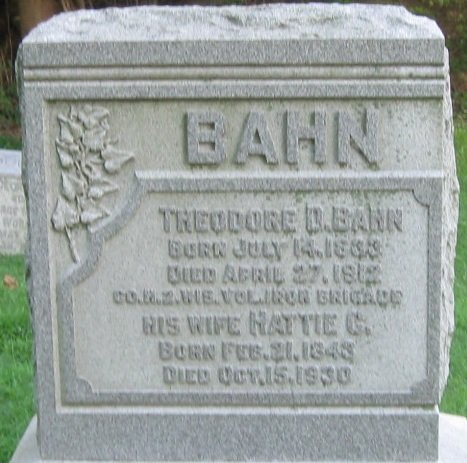 See Part 2 of this blog entry for the details on the reunion, which indeed was held in 1884 as promised!