In part 1 of this brief two-part series, we looked at the Mifflins, who were major conductors in the Underground Railroad in eastern York County, Pennsylvania, during the 1810-1840 time frame. Scores (perhaps hundreds) of freedom seekers passed through this property or were hidden here on their way to the Susquehanna River.

By the time of the Civil War, Jonathan and Susanna Mifflin were dead and their son Samuel had moved away. The Huber family owned the farm during the war years. Little did they know the war would arrive at their front doorstep.

On a cloudy Sunday afternoon, June 28, 1863, Confederate soldiers of the 31st Georgia infantry would have been cautiously moving right to left in this photo beyond the distant line of evenly spaced trees. That area was a wheat field on that long ago Sabbath as the Rebels cautiously moved forward after engaging the forward skirmish line of Col. Jacob Frick’s 27th Pennsylvania Volunteer Militia. The militia slowly fell back into Wrightsville as the Georgians pushed ahead.

Confederate Brigadier General John B. Gordon, a talented tactician who before the war’s end, would command a corps in the Army of Northern Virginia, decided to move two of his four cannon to a new position from which to shell the retiring Yankees. Surveying the battlefield, he selected the knoll crowned by a stone farmhouse and its outbuildings — the landmark Hybla farm.

Gordon sent word to Capt. William A. Tanner, a Virginian who commanded the four guns of the Courtney Artillery. The well experienced battery had been organized in July 1861 and had fought in most of Robert E. Lee’s major battles. The gun crews were competent professionals who knew their business. Tanner quickly sent one section of two guns galloping into position near the stone house. They unlimbered, sited the enemy, estimated the range, cut the fuses, loaded the pieces, aimed, and fired. His gunners would fire a total of 40 rounds during the skirmish; it is not known how many of these came from the Hybla position. 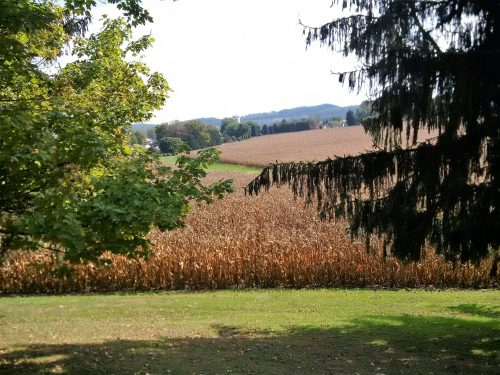 The hillock on which the house is situated is surprisingly steep and slopes off quickly to the south. The lieutenant in charge of the section may have positioned at least one of his guns, perhaps both, here in the front yard only a few feet from the front porch. Back in 1863, this position would have offered an excellent firing angle on the entrenchments of Lt. Col. William H. Sickles’ 20th Pennsylvania Volunteer Militia. The low earthworks and rifle pits ran from left to right in this photo in the distance near the tree line. Sickles’ Philadelphians, under Tanner’s harassing fire, dawdled in their protective cover despite orders from Colonel Frick to withdraw. As a result, they found their exit pathway to the burning bridge blocked by a strong column of Rebels who were moving north of Hybla toward the river. Sickles and some 20 of his men were taken prisoner. They would be taken to York and paroled. 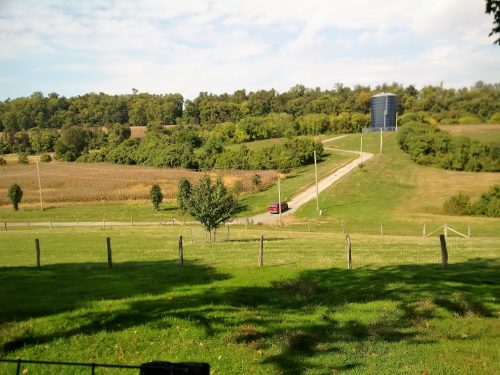 The Georgians who captured Lieutenant Colonel Sickles and his soldiers had marched from left to right in the distance across this terrain, looking north from Huber’s back yard. Today, the very busy US Route 30 is just beyond the farthest tree line. The two Confederate limbers and their teams of horses likely were stationed on the back slope of Hybla Hill for protection. 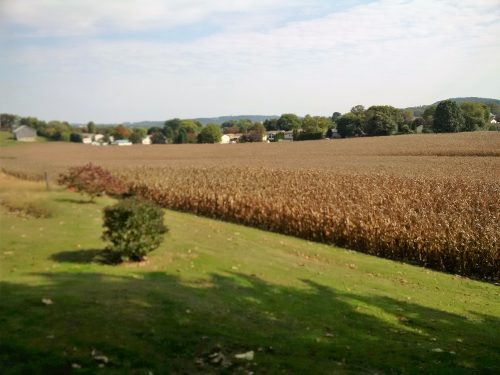 With Sickles in full retreat, it is likely that the section commander repositioned the two Rebel 3″ Rifles to the yard immediately southeast of the farmhouse and began shelling the Columbia-Wrightsville covered bridge. Several shells, likely with fuses cut too long, shot over the town and bridge and landed harmlessly in the Susquehanna River. Again, the photograph does not really indicate the steepness of Hybla Hill. 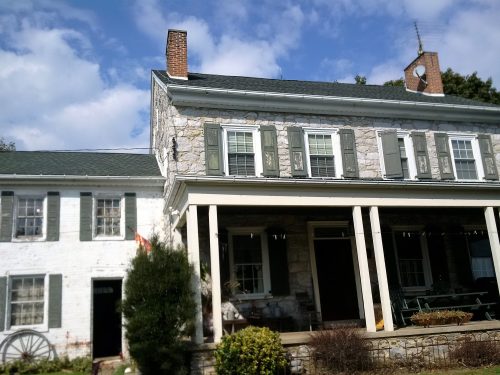 Tanner’s Virginia artillerists are believed to have camped on the Hybla farm and grazed their horses in the nearby fields. They departed at dawn on Monday, June 29, when General Gordon, his dream of capturing the bridge now in smoking ruins, withdrew westward to York to rejoin Early’s Division.

Now, the future of this historic house, and the viewsheds that the Confederate gun crews enjoyed, is uncertain. Saving Hybla should be a priority of York’s preservation community.

For more on the fascinating history of this estate, pick up a copy of Scott Mingus’s new book The Ground Swallowed Them Up: Slavery and the Underground Railroad in York County, Pa. It is available from the museum bookstore of the York County History Center or directly from the author at local book signings and personal appearances.