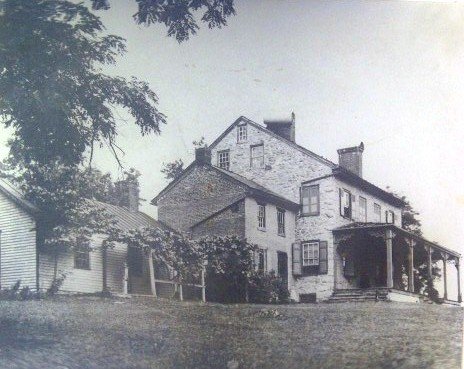 Jonathan Mifflin was from a long and broad line of Quakers who settled in the Columbia/Wright’s Ferry/Wrightsville region of southern Pennsylvania. Members of his family were prominent in social, political, martial, and business circles, and intermarried with other leading Quakers.  One relative, Thomas Mifflin, became the governor of Pennsylvania. Jonathan married Susannah Wright, from the town’s founding family.

Through his wife, Colonel Mifflin came to live in “Hybla,” the once-grand stone house shown above in this vintage image from the collection of the York County Heritage Trust. The house sat on a small knoll northwest of Wrightsville, surrounded by pastures and cultivated fields. At its peak usage, the 200-acre estate had a springhouse, large bank barn, and several outbuildings. The short, balding Mifflin was a gifted man of many talents and interests, including taking pride in his fine orchard of cherry trees.

Among his pursuits was the abolition of slavery and the deep desire to help any fugitive slave/freedom seeker that might come by his door.

He and his wife were among the earliest Underground Railroad conductors in eastern York County and, over time, their Hybla estate became a shelter for untold numbers of refugees seeking shelter, food, and transportation across the Susquehanna River into Lancaster County. Susannah’s brother, William Wright of Columbia, was a passionate and frequent conductor who likely drew his sister and brother-in-law into the enterprise. They were joined in the efforts by an oarsman named Robert Loney, who often rowed the freedom seekers across the river under the cover of darkness. Later, their son Samuel W. Mifflin became the main conductor in Wrightsville. He inherited Hybla upon his father’s death in 1840.

Here is an excerpt from my upcoming book (York County Heritage Trust, September 2016) The Ground Swallowed Them Up: Slavery and the Underground Railroad in York County, Pa.:

“On one occasion, Samuel returned home to find 13 refugees occupying his parlor. They had been found wandering aimlessly in the neighborhood, and an elder brother had sheltered them. Mifflin closed all windows to prevent anyone from seeing his ‘guests,’ and kept a lamp burning during the day. Because of stormy weather and high water, the escaped slaves remained hidden there for two days and nights before the elements calmed. Then, when the coast was clear, the Mifflin family’s longtime friend Robert Loney escorted them to the river and rowed them safely to Columbia.

Another time, Mifflin received a female fugitive, her daughter, and grandson, who had been sent to Hybla from York. He sheltered and fed them overnight until he found means to convey them secretly on to Philadelphia. Their owner was a woman from Baltimore who happened to be on a visit to Philadelphia at the time. She boasted to her friends that her slaves would never run away from home, yet at the exact moment the trio was safely ensconced in Mifflin’s house. When he was confident in their safety and the owner had left, he sent them over to Columbia where other Underground Railroad conductors forwarded them eastward to Philadelphia. There, members of the Vigilance Committee met them just outside of the city.”

Samuel Mifflin moved away in the 1850s and his house became home to the J. Huber family, who lived there during the American Civil War. Ironically, once the home of a Quaker family heavily involved in the Underground Railroad movement to help former Southern slaves, the Hybla estate on Sunday night, June 28, 1863, became a Confederate gun platform during the Skirmish of Wrightsville.

Note the Huber farm on the above map. This was the old Hybla estate. A brigade of Georgia infantry, supported by Virginia cavalrymen, attacked Union defensive positions surrounding Wrightsville. Confederate Brigadier General John Brown Gordon, later a U. S. Senator and governor of Georgia, was a slave owner and prominent defender of “states’ rights.” He ordered a two-gun section of his artillery, the Courtney (Va.) Artillery under Captain William Tanner, to advance onto the knoll near the stone house to gain a better platform from which to shell retreating Pennsylvania emergency militiamen as they headed eastward to the covered bridge that connected Wrightsville to Columbia.

The dashing, talented General Gordon could little have dreamed this  position, so important to his plans to capture the strategically important Columbia-Wrightsville Bridge, had once sheltered runaway fugitives from the South who also sought passage over the river for much different purposes. From this knoll, Virginia artillery roared, hurtling cylindrical Schenkl shells toward Wrightsville and the blue-clad soldiers. Some of the shots struck buildings in the town.

Now, the once prosperous Hybla estate is largely gone. Much of it is now occupied by a growing industrial park, which sits right on the fields where John Gordon’s crack Confederate soldiers once marched in battle line toward nervous Pennsylvania militia. Those same fields earlier had provided food and shelter for fugitive slaves.In the days before the Rebels arrived, the Union soldiers had raided Hybla for supplies and food, including taking all the cool milk from the small springhouse.

The old stone house has been a silent witness to two of York County’s most transcendent historical events — the Underground Railroad and the Confederate invasion during the Civil War.

Let’s hope it can be repurposed into some sort of history center or visitors center so that it can keep telling those stories.

Jonathan and Susannah Mifflin would be pleased, I am sure.