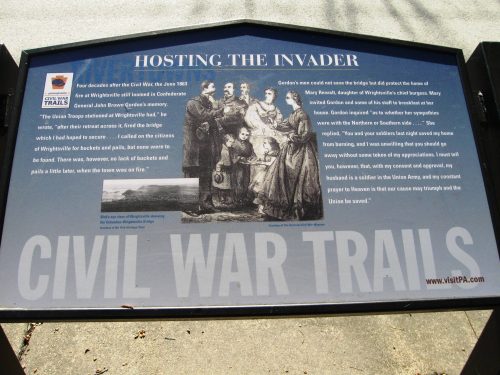 A famous Confederate general wrote a best-selling book after the Civil War in which he colorfully described a young Wrightsville, Pennsylvania, woman as “the heroine of the Susquehanna.” Mary Jane Rewalt’s generosity, and particularly her spunk and bravery, left a lasting impression on former Brig. Gen. John Brown Gordon. The popular former governor of Georgia and Democratic U.S. Senator delivered lectures across the United States, including at York’s Opera House, on “The Last Days of the Confederacy.” In these well-attended presentations, he often recounted the story of his wartime interaction with the memorable York County resident.

So, who was Mary Jane Rewalt and what about her impressed General Gordon so much?

A Heroine in the Making

Mary Jane Magee was born in Wrightsville in 1835, a daughter of James F. and Rosanna (Hinkle) Magee. Her mother died sometime before 1850. James, a wagon maker by trade, was elected as the chief burgess of Wrightsville during the war years. In April 1863, Mary Jane married young Luther Lazarus Rewalt in the groom’s hometown of Middletown in Dauphin County. The young graduate of the medical school at the University of Pennsylvania had enlisted in the 25th Pennsylvania Infantry at the start of the Civil War in April 1861 before mustering out three months later. He then moved to Wrightsville and set up his practice.

There, he met Mary Jane and married her. He was serving as a surgeon at the time of the Gettysburg Campaign, and Mary Jane was living with her widowed father while a brother, Francis J. Magee, also was a soldier. Their home was on the south side of Hellam Street just east of 3rd Street.

The Rebels Come to Wrightsville

Confederate forces invaded Pennsylvania in late June, with one powerful column approaching Harrisburg after passing through Chambersburg and Carlisle. Another division, 6,600 men under Maj. Gen. Jubal A. Early, followed the turnpike east through Gettysburg to York. Arriving on Sunday, June 28, Early sent 1,800 Georgians under Brig. Gen. John B. Gordon on to Wrightsville to seize the covered bridge over the Susquehanna River to facilitate a planned crossing into Lancaster County and subsequent assault on Harrisburg. They drove off the defending Union forces and seized control of Wrightsville.

The Rebels soon discovered that the bridge was on fire after the enemy soldiers retreated. The wind was blowing from the east, spreading flaming embers into Wrightsville and threatening the town. Several buildings, including the post office and a millinery, burned down. Gordon quickly organized his men into bucket brigades that passed water uphill into Wrightsville. They labored for several hours to save the town, including James Magee’s two-story house on Hellam Street. 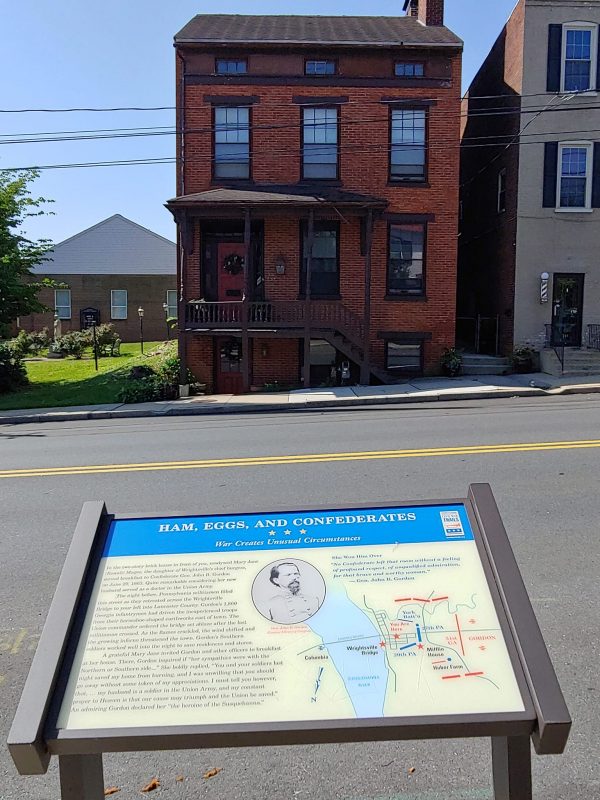 Grateful, Mary Jane and an attendant found Gordon in the throng. She invited him and his staff to breakfast the next morning as a modest token of her gratitude. “She was not wealthy,” Gordon wrote in his postwar reminiscences, but she was “blessed with an abundance of those far nobler riches of brain and heart which are the essential glories of exalted womanhood.”

Standing Up to the General

On Monday morning, the general arrived with some of his staff officers and partook of a sumptuous repast. The conversation turned to the politics. Gordon, having received a note “in a woman’s flowery handwriting” of Wrightsville’s defenses while passing through York on Sunday morning, believed his hostess could be a spy or, at least, a Confederate sympathizer. When he probed as to her political leanings, he received a stunning retort. “General Gordon, I fully comprehend you, and it is due to myself that I candidly tell you that I am a Union woman. I cannot afford to be misunderstood, nor to have you misinterpret this simple courtesy. You and your soldiers last night saved my home from burning, and I was unwilling that you should go away without receiving some token of my appreciation.”

Gordon later recalled that she was remarkably self-composed and firmly fixed on her convictions. “I must tell you, however,” she declared, “that, with my assent and approval, my husband is a soldier in the Union army, and my constant prayer to Heaven is that our cause may triumph and the Union be saved.”

Taken aback by her boldness and courage, Gordon and his comrades departed with “a feeling of profound respect, of unqualified admiration, for that brave and worthy woman.” He deemed her as “the heroine of the Susquehanna,” and his meeting evoked warm memories of his wife and mother.

After the Rebel Invasion

Luther Rewalt served later in the war as a surgeon at a military hospital in Philadelphia, and in 1865 he was the assistant surgeon of the 21st Pennsylvania Cavalry. He again returned to Wrightsville when the war ended and resumed his career. He and Mary Jane were well-respected pillars of the community and raised five children.

After the family moved to Fulda, Minnesota, in 1886, Mary Jane became involved with the Chautauqua movement, a social and educational society that brought entertainment, speakers, concerts, and cultural events to rural venues. She annually tented with her friends on the group’s campgrounds near Madison, South Dakota.

In mid-July 1895, John Gordon traveled to Madison, where the Chautauqua meeting was then taking place. His path crossed with his former Civil War hostess. According to the Madison Daily Leader of July 19, “Rev. W. H. Jordan had the rare good fortune today to introduce Gen. Gordon and Mrs. Rewalt of Madison, who the general has often said he would cross the continent to see. It was Mrs. Rewalt who was the heroine of Wrightsville, Pa., and gave Gen. Gordon a warm reception on his way to Gettysburg. Mrs. Rewalt is the mother of Mrs. Felix [Margaret J., “Maggie”] Vidal of this city.”

Details are lacking as to the conversations between Gordon and Mary Jane Rewalt, but they undoubtedly recounted their previous meeting and the intervening circumstances that led to this second encounter.

Mary Jane only had a year to live. On August 4, 1896, the Daily Leader announced, “Mrs. Felix Vidal received a telegram at 7 o’clock last evening announcing the death of her mother, Mrs. Rewalt, at Fulda. Mrs. Rewalt was well known in Madison. She was 61 years of age. Mr. and Mrs. Vidal departed for Fulda today.” She is buried in Prairie Hill Cemetery near Fulda.

Interestingly, Mary Jane was able to take care of her husband and family even after her death. “Our old friend, Dr. Rewalt, of Fulda, has ‘struck it rich,’ at last,” the paper declared on December 15. “Dr. L. L. Rewalt and family have come into possession of $13,000 from the estate of Mrs. Rewalt, who died last fall. They contemplate keeping the money together and to start a bank some place with it.”

Dr. Luther L. Rewalt lived for several more years. He began selling health tonics, which Minnesota newspapers heavily advertised, and stayed active in civic affairs as a Shriner and Mason. His daughter Jessie was a beautiful, talented young lady who was a well-known vocalist and son Frank J. (named for Mary Jane’s brother Frank) was a professional baseball player in local leagues. Dr. Rewalt died in 1925 and is buried in the family plot in Prairie Hill Cemetery. The Rewalts were the great-grandparents of novelist Gore Vidal.

Jim McClure discusses the contrast between Gordon’s first visit to York County (and the encounter with Mrs. Rewalt at Wrightsville) and his second visit as a guest lecturer. Here is his thought-provoking article that supports his contention that York essentially surrendered a second time to Gordon.