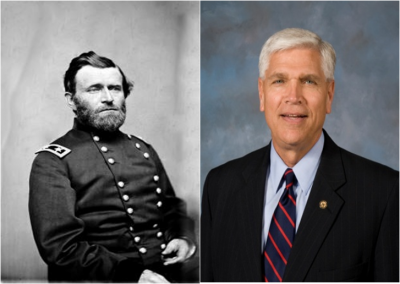 For our Friday October 25th meeting, the Harrisburg Civil War Round Table is proud to have Prof. Leonard J. Fullenkamp speak to us on the life and times of one of the Union’s best generals, Ulysses S. Grant.  Professor Fullenkamp will take us through the legacy of U. S. Grant and what his perceptions are on the general as soldier and statesman.

Professor Len Fullenkamp was commissioned in Field Artillery from the University of Dayton’s Reserve Officers Training Corps program in 1968.  During a thirty-year Army career, he served in a variety of command and staff positions in the United States, Europe, and the Republic of Vietnam.  As a Field Artillery officer, he served in command and staff assignments in the 25th Division, 82d Airborne Division, the 101st Airborne Division (Air Assault), the 2nd Ranger Battalion, and the 42d Field Artillery Brigade, Fifth Corps, US Army Europe. He retired from active duty in April 1998.

He earned a Masters Degree in History from Rice University in 1979 and taught military history at the United States Military Academy at West Point, New York, 1980-1983.  He is a graduate of the U.S. Army Command and General Staff School at Fort Leavenworth, Kansas, the Army War College, Carlisle Barracks, Pennsylvania, and the National Security Seminar on Strategy at Syracuse University.  He served as a Chief of Staff, Army Fellow, 1990-1992.

He has served on the faculty of the Army War College since 1992 with teaching assignments in the Department of Military Plans and Operations, 1992-1993, and the Department of National Security and Strategy, 1993-2013.  Professor Fullenkamp served as a co-director of the Army War College’s Advanced Warfighting Studies Program from 1999 to 2007.  He has served as a member of the Parameters editorial board since 1993. In addition to his teaching duties, Professor Fullenkamp directed the Army War College’s military staff ride program from 1993 to 2013.

He continues to serve on the faculty of the Army War College at Carlisle Barracks, Carlisle Pennsylvania, where he is Professor of Military History and Strategy, Department of National Security and Strategy.  He is the co-author of the Army War College Battlefield Guides to Gettysburg, Shiloh, and The Vicksburg Campaign.   In addition to leading battlefield walks on Civil War battlefields, Professor Fullenkamp has extensive experience leading groups on WWI battlefields in France and Belgium, and WWII battlefields in Tunisia, Sicily, Normandy, and the Ardennes.  During his years on the faculty he has held several academic chairs to include the General Dwight D. Eisenhower Chair of National Security and the Henry L. Stimson Chair of Military Studies.

The Harrisburg Civil War Round Table meets at the Radisson Penn Harris Hotel & Convention Center, Camp Hill, PA, Camp Hill Bypass @ Routes 11&15. An informal reception starts at 6:00 PM, followed by dinner at 6:45. The cost of dinner is $22.00 and reservations must be made no later than 9 PM Tuesday, October 22nd, by calling 717-512-9250 or email EllieKFeld@comcast.net. The program begins at 8:00 PM and is free to the public.