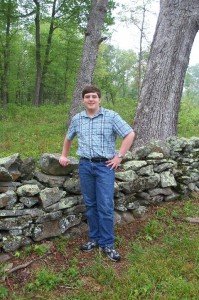 At the Friday, June 8 meeting, HCWRT member Cooper Wingert will discuss the Battle of Sporting Hill. On June 30, 1863, this engagement marked the northernmost fighting of the Gettysburg Campaign and it occurred in our backyard. The presentation will highlight the New York Militia and their somewhat humorous attempt to deal with a Southern cavalry force which they outnumbered nearly 5 to 1.

Also a brief portion of the presentation will be devoted to the previously unpublished diary of Private John Irvin Murray of the New York Militia. His diary, along with several other previously unused sources, are available in the speaker’s books. Cooper’s newest book–Almost Harrisburg: The Confederate Attempt on Pennsylvania’s Capital, is an in-depth history of the ‘highwater mark’ of the Gettysburg Campaign. It will be on sale for $12, along with his other books, The Battle of Sporting Hill: A History & Guide, for $8, and A Virginian in the Vanguard for $5.
Cooper, a fourteen-year-old student, has written and edited four books on the Harrisburg area. His next book, which he is currently negotiating with publishers, will be a history of the 26th Pennsylvania Emergency Militia.
The Harrisburg Civil War Round Table meets at the Radisson Penn Harris Hotel & Convention Center, Camp Hill, PA, Camp Hill Bypass @ Routes 11&15. An informal reception starts at 6:00 PM, followed by dinner at 6:45. The cost of dinner is $20.00 and reservations must be made by no later than Tuesday, June 5, by calling 717-938-3706. The program begins at 8:00 PM and is free to the public.