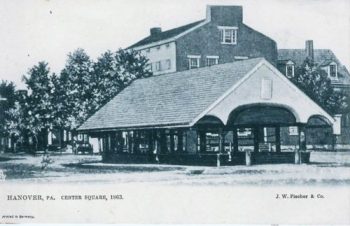 Hanover, Pennsylvania, during the Civil War was an important regional railroad town serving southwestern York County with connections northwest to Gettysburg, west to Littlestown, and eastward to Hanover Junction, where the local Hanover Branch Railroad intersected the larger Northern Central Railway (which ran from Baltimore north through York and Harrisburg on to Elmira, New York). In addition to the railroads, Hanover boasted a pair of tanneries and other small industries, as well as serving as an important hub for transporting local freight and produce to larger markets via the extensive road network and the frequent train service.

During the Gettysburg Campaign, Confederate Major General Jubal A. Early seized Gettysburg on Friday, June 26, 1863, after driving off hastily organized Pennsylvania emergency militia and local home guard cavalrymen. The next morning, Early dispatched Lieutenant Colonel Elijah V. White and the 35th Battalion, Virginia Cavalry to follow the railroad to Hanover, destroying bridges along the way (especially a large bridge near New Oxford). White, who hold the distinction of being the first Confederate officer to enter Gettysburg, led his cavaliers to Hanover, arriving about 10 a.m. on Saturday morning, June 27. Hanover became the first of dozens of York County towns and villages to see Confederate flags waving in the streets.

Rebel soldiers visited Hanover’s stores and inns, taking what they wanted and often paying with Confederate money, valueless outside of the Confederacy. They purchased liquor, food, clothing, hats, and other sundries, as well as taking their horses to be shod. One businessman, William Boadenhamer, had taken precautions to safeguard his merchandise prior to “Lige” White’s arrival. Here is his story, adapted from an article by historian George R. Prowell in the June 25, 1905, edition of the Adams County Independent newspaper of Littlestown.

An Incident of the Confederate Invasion

William Boadenhamer began the jewelry business in Hanover several years before the civil war. He had built up an encouraging trade, and had a considerable stock of gold and silver watches, rings, chains and other jewelry when the confederate invasion into Pennsylvania took place in 1863. There were many rumors that the enemy was approaching Hanover during the last days of June in the year named, but the arrival of White’s cavalry from Gettysburg on the morning of June 27 was somewhat unexpected.

General Early with a division of eight thousand [actually 6,600] men had entered Gettysburg on the evening of June 26, and bivouacked for the night a short distance from the borough. Early in the morning of June 27 a battalion of two hundred men under Lieutenant Colonel White was detached from Early’s command to go through Hanover to the Northern Central railway at Hanover Junction. Their mission in going there was to burn the railroad bridges and cut the telegraph wires between Harrisburg and Washington. Colonel White and his men had a large experience in West Virginia in what was then known as guerilla warfare. They were bold and daring fellows, and were suited for the purpose they were set apart to do by Jubal Early who led the advance of Lee’s army on the way to Gettysburg and York. Early intended to reach York himself with a whole division on the morning of June 28th, and he accomplished his aim by arriving in this city just as the chuch bells were ringing for Sunday morning worship.

Colonel White was a man in middle life with a florid complexion and rugged appearance. When he entered Hanover he rode up toward the [Central] hotel on Center Square and delivered a brief speech on horse back. The language used was vociferous and his manner was somewhat like that of a western cowboy of today, but his men conducted few depredations in and around Hanover, for they remained there less than one hour until they moved on to Hanover Junction.

When William Boadenhamer heard that the enemy was approaching Hanover, he put his watches and jewelry in a large box and asked his cousin, Carl Sneeringer, to load them on a two-horse wagon with the design of moving down toward Maryland, so that his valuable treasures would not fall into the hands of the confederate troopers. He remained too long in Hanover before he and Mr. Sneeringer started down York street on their perilous trip. In fact he was in Center Square at Hanover when the advance of White’s cavalry entered Carlisle St., only three squares to the north. Then he mounted a fleet gray mare and rode beside the wagon with his cousin Sneeringer. In his pocket he had placed four hundred in greenback currency. He was more eager that this should be safe [from] the hands of the confederates than the watches and jewelry themselves, which were valued at two thousand dollars. Just as the first troops had entered Center Square, Mr. Sneeringer started at a gallop down the street with the box of jewelry in his wagon; Mr. Boadenhamer rode by his side. Just as they reached the suburbs of the town they saw three confederates on horse back pursuing them in hot speed. Then as they looked around they heard in loud tones the words:

“Halt you blankety-black-sons of Yanks. If you do not halt we will shoot.” The two men did not stop, but as Boadenhamer on his gray mare could move more rapidly than Sneeringer he dashed away down the York road with his four hundred dollars in his pocket. In less than two hours he arrived in York with his horse covered with foam, and he had important news to tell our people of the arrival of the enemy within the borders of York county. The people of this town were eager to hear this news and gathered around him while he told the story of how the enemy had captured his watches and jewelry, and how they fired after him because he would not stop when they ordered him to halt at Hanover.

The treasures that Mr. Sneeringer had in his wagon were captured just as this gentleman had gotten to the edge of Hanover. They [the Rebels] did not know at first what was in it, but they unlocked the box and took it down underneath some willow trees at Mumma’s mill at this place [along Oil Creek east of Hanover]. Three other soldiers joined them; then they opened the box and looked with interest at the gold and silver watches, the breast pins, the gold and silver watch chains, and other silverware. In all there were more than one hundred valuable watches. Three or four boys were lying concealed in a wheat field and they heard these rebel soldiers shout in ecstasy of the big “haul” they had made, and this is nearly all that is known of Mr. Boadenhamer’s jewelry that was captured by the confederates on June 27, 1863. All that he ever heard was that one of these men had given a breast pin to a little girl near Jefferson for a glass of water in the afternoon of that day.

Some years later, about 1867, Governor [John W.] Geary appointed a commission to audit the accounts of these “border raid claims.” Honorable Thomas E. Cochrane and Colonel Levi Maish and somebody else whose name cannot be recalled, sat in the office of the county auditors at York for two or three weeks gathering information and recommending to the governor the payment of these claims. Boadenhamer presented his claim. It was endorsed by the commission, and the certificate signed by Governor Geary. It is a rather interesting little paper for Mr. Boadenhamer to look at now and then, but the claim was never paid, and like all other persons in Southern Pennsylvania who lost horses, goods or any other personal property during the confederate invasion were never paid by the state or nation.

After Mr. Sneeringer returned to Center Square at Hanover he appealed to White who was then standing in the hotel that he should recover for him his horse and wagon. The confederate officer rode down York street for that purpose, as he claimed, of getting back both the team and the jewelry, but only the horses and wagon could be found. The valuables had disappeared.

Blogger’s note: Some accounts suggest the Rebel cavalrymen pocketed as much of Boadenhamer’s jewelry as they could and buried the rest along Oil Creek. It was later dug up, according to these reports, so there are no buried Confederate riches there today. Boadenhamer’s post-war border claim was for $1,000. He reported to the commission that White’s cavalrymen had taken 4 gold watches, 45 silver watches, 90 gold rings, 12 silver thimbles, 36 silver spectacles, 280 watch keys, 2 dozen pen knives, 3 dozen plated spoons, 12 butter knives, 12 silk watch guards, a large lot of gold and plated breast pins/brooches and earrings, as well as many gold watch chains.