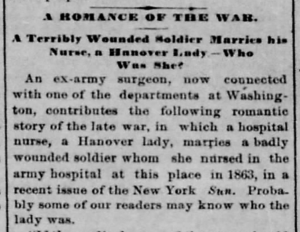 The York Daily on December 2, 1887, reprinted a story from the Hanover Spectator about an unnamed Hanover woman who had nursed a badly wounded soldier, shot at the battle of Gettysburg, back to health and then married him. Such incidents were not unknown in York County; there are a few accounts of patients at the U.S. Army General Hospital in York who married local women who had nursed them or ministered to them. The chief surgeon of the hospital, Dr. Henry Palmer of Wisconsin, also wed a young woman during the war.

Here is the story of the Hanover woman and her beau.

“An ex-army surgeon, now connected with one of the departments at Washington, contributes the following romantic story of the late war, which a hospital nurse, a Hanover lady, marries a badly wounded soldier whom she nursed in the army hospital in this place in 1863, in a recent issue of the New York Sun. Probably some of our readers may know who the lady was.

“‘If the medical corps of the army should give their reminiscences, they could add a great many interesting stories to the incidents of the war which make such interesting reading to-day.  In 1863 I was the acting assistant surgeon of the Eighteenth Pennsylvania Cavalry. We crossed the Potomac at Racoon Ford, and marched to Frederick [Maryland], where the command was changed. Gen. Hooker succeeded Gen. Meade at the head of the division, and Gen. Stahl was made commandant of cavalry, in place of Gen. Pleasonton [editor’s note: he doctor has both of these backwards. Meade replaced Hooker at the head of the army, and Pleasonton was in charge of the cavalry].’

“‘On Sunday, July 2, the first brigade was involved in a small fight at Littlestown, and following that we had another little flurry at Red Mills. Then came the battle of Gettysburg. I was detailed to take charge of the hospital at Hanover, which was a few miles away from the field, and two or three days after the fight a poor fellow was brought in who had been found in a wheat field, shot all to pieces.  He had lain in the broiling sun for three days without food or shelter of any kind, and he was in a horrible condition. His case seemed a hopeless one from the moment we laid eyes upon him, but everything was done to ease his dying hours, and to make him comfortable as he passed out of the world. Under the direction of the supervising surgeon, a large dose of morphine was administered in order that he might pass away with as little consciousness of pain as possible. But forty-eight hours afterward he still lived, and did not seem inclined at all to quit.’

“‘Just then a young lady from Hanover, who had been helping around the hospital, asked if there was any special case of which she might take charge. She was told that there were, and was assigned to look after this poor fellow. She did her work so well that shortly after he was able to be removed from the field hospital to a better one [likely the army hospital n York], where he continued to improve, and shortly after, entirely recovered. This man’s name was McEwen, and he had been a private in a Missouri regiment [? No troops from Missouri were at Gettysburg]. When discharged as a convalescent he at once married the young lady who had done so much toward saving his life, and soon afterward returned to his command, where he rapidly rose in rank, and was finally mustered out as a Captain.'”

The identity of both the soldier and the young lady from Hanover remain unknown. Does anyone have any more information on these two? If so, please send an email to scottmingus@yahoo.com.