Hanover veteran fought at the battle of Gettysburg; supposedly only man from the town to do so 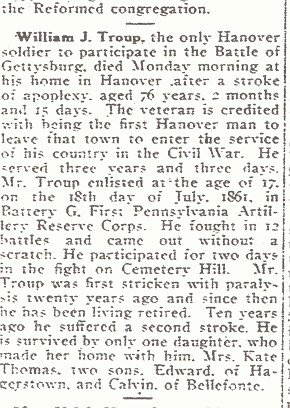 Hanover, Pennsylvania, played in interesting role in the Gettysburg Campaign. Dozens of men from the town and surrounding countryside enrolled in the 26th Pennsylvania Volunteer Militia, one of the emergency regiments raised to try to delay the Rebel invaders until the Union Army of the Potomac arrived from Virginia. They would engage in some small skirmishes near Gettysburg on June 26, 1863. The following day, Hanover residents saw a Confederate battle flag wave in their streets when Lt. Col. Elijah V. White’s 35th Battalion, Virginia Cavalry arrived. On June 30, thousands of opposing cavalrymen clashed in the battle of Hanover. The next three days the sound of distant artillery from the battle of Gettysburg reverberated through the region.

Interestingly, despite its strong connection to the Gettysburg Campaign and proximity to Gettysburg, newspapers have reported that only one man from the town actually fought in the battle of Gettysburg in the Army of the Potomac. The companies raised in Hanover early in the war were in regiments not in that army, with the apparent single exception of Private William James Troup.

Troup, according to multiple newspaper reports from the early 20th century, was the only Hanover man to participate in the battle of Gettysburg. He manned some of the artillery (Ricketts’ Battery) whose thunder could be heard in his hometown, about 14 miles to the southeast. 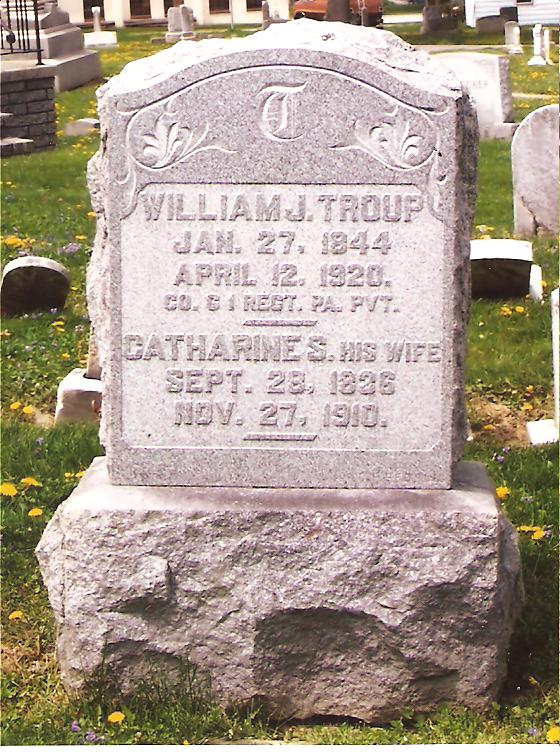 Troup is buried in Hanover’s Mount Olivet Cemetery. The above photo of his tombstone is from Find-a-Grave.

William James Troup was born on January 27, 1844, in Hanover to William and Ellen McMaster Troup. He married Catherine S. Becker, had five children, and worked as a blacksmith. The couple owned a house on Pleasant Street in the eastern part of Hanover.

Troup’s last few years were tragic. About the turn of the century, he suffered a series of strokes which left him partially paralyzed and unable to care for himself. Catherine became his nursemaid. Another tragedy struck in 1910.

According to the November 30, 1910, Gettysburg Compiler, Mrs. Troup died in most unfortunate circumstances.

“Mrs. William J Troup of Hanover met with death in a pathetic form. She was nursing her husband who was in bed powerless from paralysis, when paralysis overcame her. This was on last Friday evening and the next morning neighbors saw a light burning in the dining room and all the doors locked. They procured a ladder effected an entrance through a second story window and a most distressing sight met their gaze. Mrs. Troop was in an unconscious condition on the floor and her husband in bed powerless to help her. Mrs. Troup lingered until Sunday morning when she passed away at age 74 years 1 month and 28 days .She is survived by her husband, two sons Edward J Troup, Hanover and Calvin H Troup of Bellefonte PA and one daughter Mrs. Catherine Thomas of Hanover She is also survived by a sister Miss Mary Alwood of Hanover and 3 brothers Adam Becker of Midway, John Becker of Hanover and Henry Becker of Conewago Twp Adams Co. Funeral on Tuesday Nov 29th.Services by Rev A.M. Heilman, pastor of St Matthew’s Lutheran Church . Interment in Mt Olivet Cemetery. The condition of Mr. Troup is very critical.”

Ten years later, still bed-fast from his own medical issues, William Troup expired on April 12, 1920. Here are two of his obituaries, both of which mention his service at Gettysburg.

“William J. Troup. Hanover, succumbed to the third stroke of paralysis, by which he was afflicted during the past 20 years, Monday morning. He was aged 76 years. The other two strokes of paralysis came at 10 year intervals and totally incapacitated him, as they occurred, each one affecting his right side. He was born in Hanover, where he was employed for many years as a blacksmith. His wife died about 9 years ago under distressing circumstances. Mr. Troup being too ill to call assistance until her death ensued. He is survived by only one daughter, who made her home with jhim. Mrs. Kate Thomas, two sons; also two brothers. He was the first, Hanover-born man to enlist and Hanover’s only native son who took part in the battle at, Gettysburg. He participated in many hard fought battles, and he was featured on different occasions in newspapers for the part, he took in the Civil War.”

And from the Gettysburg Compiler of Saturday, April 17, 1920:

“William J Troup, the only Hanover soldier to participate in the Battle of Gettysburg, died Monday morning at his home in Hanover after a stroke of apoplexy, aged 76 years 2 months and 15 days. The veteran is credited with being the first Hanover man to leave that town to enter the service of his country in the Civil War. He served three years and three days. Mr. Troup enlisted at the age of 17 on the 18th day of July 1861, in Battery G First Pennsylvania Artillery Reserve Corps. He fought in 13 battles and came out without a scratch. He participated for two days in the fight on Cemetery Hill. Mr. Troup was first stricken with paralysis twenty years ago and since then has been living retired. Ten years ago he suffered a second stroke. He is survived by only one daughter who made her home with him, Mrs. Kate Thomas, two sons Edward of Hagerstown and Calvin of Bellefonte.”