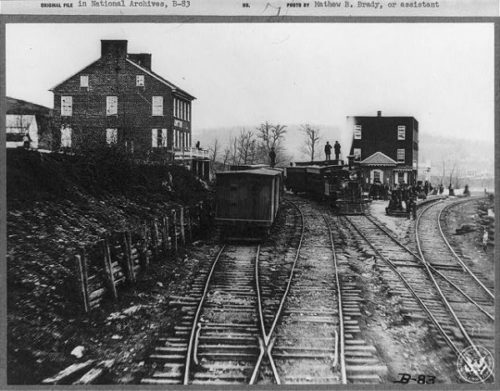 Hanover Junction, Pennsylvania. The intersection of the Northern Central Railway (right) and the Hanover Branch Railroad (left). The latter in 1863 terminated in Gettysburg. Courtesy of the Library of Congress.

After three days of cursory training in Harrisburg, on Wednesday, June 24, 1863, Colonel William Wesley Jennings‘ 26th Pennsylvania Volunteer Militia marched to a waiting train of the Pennsylvania Railroad. Their destination was a small crossroads town well to the southwest in Adams County, a place where Company A had been raised. it was called Gettysburg. Their mission? Delay any Confederate attempt to drive east through that town toward York and the Columbia Bridge (the only passage over the Susquehanna River between Harrisburg and the Maryland state line).Whistles blew and the steam locomotive chugged out of the capital. On board, the men whooped and shouted as their adventure as soldiers began.

They crossed the Susquehanna and eventually headed southeast.One of the starry-eyed new soldiers related, “[We] finally started off on the road to York, amid the cheering of all on board. We travelled along very slowly, sometimes stopping for a half an hour or more, and then creeping on at such a snail’s pace that it was very tiresome. I remember very distinctly in what a glorious humor we all were, without any anxiety except to reach the end of our

journey. At nearly every house which we passed the women came to the windows and waved their handkerchiefs, and then all set up such a cheering, hurrahing, and tigering that it was enough to deafen one.”

The train passed through northeastern York County, loosely following the west bank of the broad river. They passed through Goldsboro and York Haven, where cheering residents encouraged the men. Shortly after passing over the sturdy bridge on Conewago Creek, they spotted the glistening white canvas tents of the 20th Pennsylvania Volunteer Militia, a regiment from Philadelphia that was protecting the bridges in several parts of York County. One of Colonel Jennings’ soldiers believed, “Their camps looked so pleasant upon the green, that the idea passed through my mind of how nice it would be to be stationed in some copse or grove for a few weeks and guard a bridge or something of the kind, then return home.” Instead, their orders likely meant they could see combat. Some, perhaps many, might never return.

The train headed almost due south through the Mount Wolf-Liverpool region and Emigsville. Without stopping, the train slowed as it passed through the largest town in the area, York, where crowds welcomed the troop train, as they had for so many others throughout the war. They saw a large contingent of paroled Union soldiers going into camp at York while awaiting transportation back to their various states.

After leaving York, the men observed that the countryside south of town “seemed to be exceedingly dry, and the crops, which were then nearly ready to harvest, were generally very poor.” The train passed scores of large bank barns, mostly painted red in the Pennsylvania German style.Reaching Hanover Junction, the soldiers had some time to stretch their legs and converse with the locals while railroad crews prepared for the westward jaunt to Gettysburg. The PRR cars (some boxcars, some open coal cars) were coupled to a Hanover Branch locomotive for the short twelve-and-a-half mile jaunt to Hanover.

In late morning, the 26th Militia arrived there. Company I had left Hanover a little over a week ago, and they were welcomed as conquering heroes. The atmosphere was light-hearted, considering the gravity of their task of repelling the invasion of south-central Pennsylvania by the Army of Northern Virginia.The train stopped at the depot for half an hour, “a time of great excitement” according to a militiaman. A crowd gathered to welcome the soldiers, who asked, “Are there any Confederates in the neighborhood?” No enemy was reported nearby. Crews divided the train into two sections, and Jennings sent a portion of the regiment on ahead toward Gettysburg while he awaited a second locomotive for the remaining cars.

A railroad mishap in Adams County in the afternoon delayed the regiment’s arrival. Shortly after passing through New Oxford, the lead section struck “a poor woman’s cow” on the tracks near Swift Run, six miles east of Gettysburg. The locomotive, tender, and several cars derailed, sending startled soldiers sprawling. The accident tore up several yards of rails and considerably damaged the engine. Luckily, only two men suffered minor scratches. The militiamen camped near the wrecked tracks and awaited the arrival of the second section, which was several mil

es behind. They butchered the cow and enjoyed fresh beef.The next day the men lounged in camp and foraged the region for food. Wagonloads of people from Gettysburg rode into the camp, bringing picnic baskets and armloads of food, pies, cakes, and all sorts of delicacies for the Pennsylvania College boys and townsmen of Company A. The Hanover boys feasted on snacks they had received from their families and friends. The rest of the regiment was a tad jealous, and several men are known to have lied to the civilians that they too were part of Company A in order to get some goodies from the unsuspecting pie bearers.

At 8 p.m. Colonel Jennings received an order from his superior officer, Granville Haller, who commanded the District of Adams and York Counties from his headquarters in the Eagle Hotel in downtown Gettysburg. He was to send 100 riflemen to Gettysburg to be used in the mountain range in western Adams County to harass the enemy. Among the young soldiers Jennings selected were two of the Hanover contingent. They traipsed the six miles to Gettysburg, arriving in a rainstorm about midnight, where to their relied they learned that they would not have to march through the night to reach South Mountain. After getting a much belated dinner and some hot coffee, they curled up on the platform at the train station.

In the morning, they would be joined by the rest of the regiment.