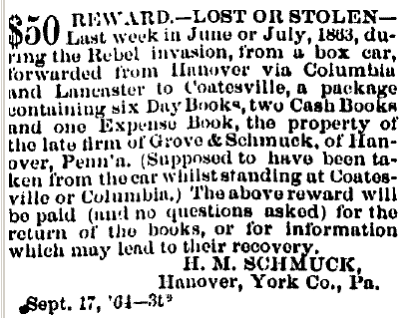 The above notice appeared in the October 1, 1864, edition of the Columbia Spy. It had been more than a year since the Confederate invasion of York County, Pennsylvania, during the Gettysburg Campaign, and Hanover merchant Henry M. Schmuck still had not located his missing records. Apparently someone took them from a railcar after Schmuck sent the records to safety across the Susquehanna River. Schmuck later owned a profitable coal and lumber business, Schmuck & Sons, the successor to Grove & Schmuck.

Schmuck for most of his adult life was an elder in the Reformed Church of the United States, Synod of the Potomac, and a very well respected businessman. With his business acumen, the church group elected him as their treasurer. His father Joseph Schmuck had been a preacher in the denomination and the owner/editor of one of the town’s earliest newspapers, The Guardian (Joseph died on the job at the age of 33 from overexertion from operating the old-style Franklin hand-press).

After the war, Schmuck was a director of the Hanover & York Railroad and the president of the First National Bank of Hanover. There is no record that he ever recovered his missing property.

Here is a little more on this Civil War personality from York County, Pa.

Henry M. Schmuck, of the firm of Schmuck & Sons, lumber and coal dealers, and president of the First National Bank of Hanover, was born at Hanover, September 26, 1824, is a son of Joseph and Christiana (Felty) Schmuck, and is of German descent. His father was born in York County, and in 1812 established the first English newspaper in Hanover, which was known as the Hanover Guardian. His death occurred in March, 1829. The grandfather was Henry Felty, a cavalry officer in the was of the Revolution. Our subject was educated at Hanover Academy, and from 1841 to 1847 was employed in the dry goods store of Isaac Baugher, Emmittsburg, Md. In 1847 he went to Charleston, S. C. and until 1848 was in the employ of C. & E. L. Kerrison, wholesale dry goods dealers. In 1852 Mr. Schmuck engaged in the lumber and coal business in Hanover, and in this has since continued. In 1880 he was elected president of the First National Bank of Hanover. He was married in 1851 to Miss. Amanda Reid. Of Cincinnati, Ohio, and a native of Emmittsburg, Md., and daughter of Patrick Reid. Eight children have been born to this union: John H., Blanch A., William A., Eugene R., Helen V., Emma E., Minnie C. and Percival. Mr. S. is a member of the Emanuel Reformed Church.