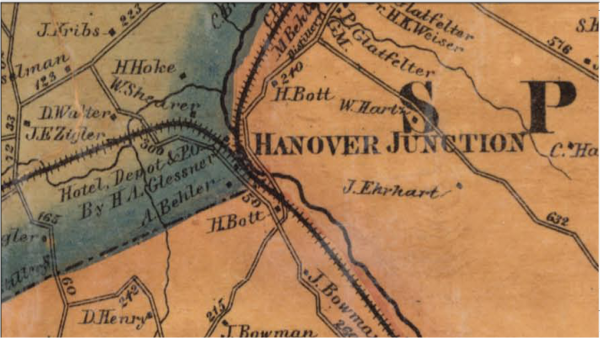 Hanover Junction, Pennsylvania, has a storied history, including visits by several presidents such as Abraham Lincoln. An important railroad intersection during the Civil War, more than 11,000 wounded soldiers were evacuated by rail from the Gettysburg battlefield through the junction for shipment to military and civilian hospitals. Harry I. Gladfelter, then a 12-year-old lad from the nearby village of Seven Valleys, carried oranges from a U. S. Christian Commission car to the wounded men at the junction. His sister Amanda worked as a barmaid at the nearby Junction Hotel, run by a man named John Scott.

Another member of the extended Gladfelter family, 20-year-old Edward Gladfelter, was in the news in March 1865. Unfortunately, it was not good news.

A trio of Union soldiers soldiers kidnapped and murdered young Gladfelter near Leitersburg, Maryland, as he was returning to York County with four army horses entrusted to his care.

Here is the sad story…

While doing a favor for a family friend, the ill-fated Edward Gladfelter ends up terrified in the custody of rogue Union soldiers and then is casually murdered.

Judge George French of Hagerstown heard the case, found the trio of soldiers guilty, and passed judgment in March 1865. 32-year-old Abraham Coon (the triggerman) of Fayette County, Pa., and 27-year-old Lindsey Forney, both from Fayette County, Pa., who reportedly served in the 1st West Virginia Cavalry, were found by a jury of guilty of murder in the first degree and sentenced to be executed by hanging at a date to be decided by Maryland Governor Augustus Bradford. The third defendant, 32-year-old John Riley of Berryville, Virginia, was found guilty of murder in the second degree and sentenced to 18 years in the Maryland Penitentiary. Riley was a widower with two children.

Ironically, Judge French was himself the father of a Union cavalryman.

In passing sentence on Coon and Forney, Judge French remarked, “You have both been tried by a jury of your country for the high crime of murder, and by their unanimous verdict have been convicted of Murder in the First Degree, the penalty for which is death. To-day you have been brought into court for the purpose of receiving the judgment which the law requires me to pronounce in your case. Have you any reason to assign why the court should not now proceed to pass sentence upon you?

“You have been indicted, arraigned and tried for the murder of Edward Gladfelter in August last. You have been tried by a fair and unprejudiced jury of your own selection. You have had able learned and eloquent counsel who defended you, with a fervor and zeal in your behalf, and for your acquittance that deserved a better cause, but their eloquence, zeal and ability could not secure your acquittance against the overrwhelming evidence that proved your guilt.

“The testimony against you disclosed the fact that on the 27th day of August, last, Edward Gladfelter, an innocent, harmless boy of twenty summers, was passing through the town of Leitersburg, leading several horses, the property of an officer in the army, on his way to Hanover Junction, Pa., his home. That you on that occasion with several other cavalry soldiers, who had straggled from your regiment, and the post of duty and danger, just at an hour when your country most needed your services, arrested the boy as a horse thief. You dismounted him from his horses, you pronounced his written order and authority for the horses he had in charge a forgery, and under the pretended statement, that you were going to deliver him and his horses over to some drover, or officer of the government that had passed in advance of you.

“You then made the poor, innocent, frightened youth, on that hot summer day, run side by side of you on your horses as you galloped out the Waynesboro turnpike, (not the road the drover had gone.) urging him forward with the declaration, to run on, you son of a b—, or you would blow his brains out. To several persons on the road that enquired of you what you were going to do with that man, you replied, he was a horse thief, and that you were going to blow his d—d brains out.

“On the road running, the boy was seen delivering to you his silver watch; a little further on, 300 yards this side of the spot where the deadly act was perpetrated, you were seen robbing his body, as he stood pale, and trembling in your power, of his money, his pocket book, his comb, etc., etc. You then took him to the next hill, scarcely three fourths of a mile from the town of Leitersburg where you had just departed from, and there wilfully and deliberately blew his brains out with a pistol or gun, or aided in the act. Edward Gladfelter fell at your horses’ feet in the middle of the high road, a murdered man, a lifeless body.

” Then you left him on the public road to welter in his gore, and returned shouting, soon after the pistil-shot was heard, through Leitersburg, and when near Hagerstown you were arrested by Lieut. Barclay, to whom you confessed you were present at the murder, and delivered over to him the written order for the horses, which you had pronounced a forgery in the morning. You delivered over to him also, his silver watch, the pocket book you had robbed the boy of, which articles were recognized in this Court by Mrs. Gladfelter, the poor broken-hearted mother, as the property of her murdered son.”

Judge French then sternly rebuked the pair of criminals, exclaiming that, “In all the annals of crime, I have never read of so foul, so black, so inhuman a murder as that for which you have been just tried and convicted. The hearts of all that heard the testimony in your case must have sickened and saddened, as they heard detailed the barbarities you committed upon that poor unoffending boy, as he ran, terror-stricken by your side that hot day, to the spot where you, without a single motive but a thirst for blood, and instigated by the Devil, sent him without a moments warning, and without mercy upon your part, uncalled, unbidden into the presence of his God, and his Judge.

“These are some of the facts, that proved your guilt, and I do not rehearse them to harrow your feelings, or to cause you one pang; but to exhibit to you, how clear your guilt, how just the verdict in your case.

“God knows I would not plant another thorn in your pillow, or another arrow in your guilty consciences. The solemn duty I am about to perform, in sentencing you to an ignominious death, is to me one of the most painful acts of my life, and I would gladly shrink from it, but as the organ of the law, through which it speaks, the occasion must be met, and my duty must be performed.

“But before doing so, permit me to counsel you, at once to abandon all hope of this life, and prepare at once to meet that just and righteous God before whom you must so soon appear. Unlike poor Edward Gladfelter, whom you sent without a moment’s preparation into the presence of his Judge, you will yet have an interval of time between this day and the day of your execution. Spend this interval in seeking that comfort and peace of mind which the Christian religion alone can give you. Go to the Great Redeemer of the world, the sinner’s best friend, confess to him your guilt and crimes, and seek for Heaven a pardon through all atoning blood. He it is that has left upon record for your comfort and for my comfort, and for all such frail creatures as we are, this blessed truth, ‘Though your sins be as scarlet, they shall be white as snow.’

“Go to him then, when you leave this Hall, and seek earnestly His favor, His presence, His forgiveness, and if you seek him properly, the few brief hours you have yet to spend on this earth, will be to you, yet, the sweetest hours of your lives. And when you come to stand upon the threshold of death, may you experience the comforting assurance that He once gave to a dying malefactor, ‘This day shalt thou be with me in Paradise,’ this is my fervent and sincere prayer for you.”

With his Christian admonition concluded, Judge French solemnly returned to the judicial matter at hand.

“The sentence of this Court is, that you, Lindsey Forney be taken from this Hall to the jail of Washington County, from which you came, and be there confined until the time of your execution, and that, at such time as the Governor of this State shall by his warrant appoint, you be taken thence by the Sheriff of this County, to the place of execution, and that you then and there suffer death by hanging by the neck. And may God, in His infinite love, have mercy upon you.”

Coon and Forney were hung publicly on July 7, 1865, near the Hagerstown jail. Both men left behind young widows.